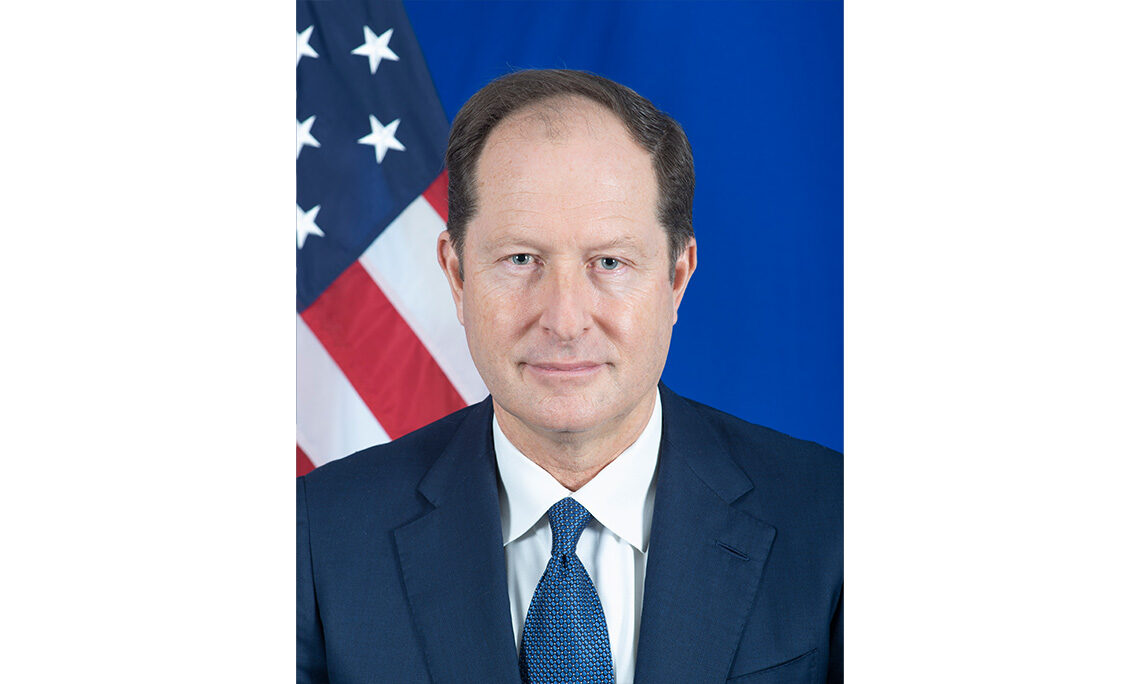 Good afternoon, everyone!  I am just “a few weeks old” as the new U.S. Ambassador to Poland.  I am thrilled that this event is one of my first public speaking engagements.

American and European democracies are vibrant, percolating culture plates of ideas because of media freedom.  Thank you, thank you, to the organizers of this event, for elevating this key topic.

Thank you so much Bartosz for the warm introduction!  We met when we were “slightly younger,” since you and I are still such young guys!  Seriously, you were a respected correspondent in Washington, D.C., sharing America’s story in Poland.

Now all these years later, we both find ourselves in Poland.  Two D.C. fans of yours, my late father Zbigniew Brzezinski and Jan Nowak Jezioranski, so respected your work and would have loved to see us together now.

I’d also like to acknowledge and congratulate Jamil Anderlini on becoming Editor-in-Chief at Politico Europe.  He’s one of the many talented and experienced speakers you’ll hear from during this Summit.

I remember back in 2019 when he hosted me and a group of students from the University of Virginia at the Hong Kong Press club.  Your message to us on media freedom and the rule of law is all the more relevant today.

I am concerned about the increase of attacks on freedom of the press in Hong Kong.  We must continue to urge authorities in Hong Kong and the PRC to respect free speech and let journalists safely do their jobs.  This topic will be part of a panel discussion that I’m looking forward to.

It’s no secret that ideas, expression, and the truth is under attack around the globe.  That attack takes many forms.

Digital threats like online and direct harassment are the norm.  Journalists are heroes for continuing to tell their stories, against tremendous odds.

It takes courage; it takes guts.  It’s something I’ve seen firsthand from my sister, Mika Brzezinski.  She’s been a journalist for forty years.

She has faced intimidation, she’s been bullied, and these days that criticism comes at lighting fast speed.  There are social media comments Mika has received that are so vile I can’t even bring myself to read them out loud.

But my sister, a true warrior, has never let that deter her from telling stories that matter.

Where did she get that bravado?  Poland is one place I do not have to reach for the answer:  from my Dad.

I am so proud my late father Zbigniew Brzezinski spoke truth to power for his entire career, for his ideas, for his advocacy.  He too was a warrior.

I remember the reaction to his call for ending US involvement in Iraq.  He was literally told, no yelled at, by friends and colleagues that since he was not born in the U.S. but instead a naturalized citizen, that he had a special obligation to support the war in Iraq.

But, he wrote opinion pieces for the LA Times, he spoke to NPR, he went to Congress.  He didn’t stop talking about disengagement.  That taught his kids a valuable lesson:  to always keep fighting for the truth and what you believe in.

Of course, another hero I must mention is investigative journalist Carl Bernstein.  He’s a regular guest on my sister’s show Morning Joe.

Lucky for us he also is speaking at the conclusion of this Summit.  Nearly 50 years ago Bernstein, alongside Bob Woodward, untangled the Watergate conspiracy that led to the resignation of President Richard Nixon in 1974.

He won a Pulitzer Prize for his relentless efforts in the face of intimidation.  He’s still at it too; Carl just released a new book, Chasing History: A Kid in the Newsroom.

I can’t begin to understand the pressure Carl was under at the time, but I do know what it’s like telling a story that the world needs to know.

Three decades ago, when I was a Fulbright scholar in Poland I wrote a book, The Struggle for Constitutionalism in Poland.  I wrote it just after the fall of communism and examined the role of the rule of law in Poland’s re-entry into European democracy.

Freedom of expression and freedom of the press were an integral part of that struggle.  Thanks to Fulbright, one of America’s greatest platforms for engaging the world, I had the chance to observe and write about challenges that became manifest as constitutionalism was taking root in Poland, with respect for enduring constitutional arrangements being a central test of the effective operation and growth of liberal democracy.

Fast forward 30 years.  Today in 2022, the discussion about press freedom in Poland continues. In the past several years Poland’s ranking in the Reporters Without Borders Press Freedom Index has dropped from 18th to 64th.

That’s not good folks!  Poland has worked for decades to foster a vibrant and free media.  During the Solidarity era, Poland was identified around the world with the fight for freedom of expression.

I would like to thank Polish President Andrzej Duda for taking an important step by vetoing the so-called Lex TVN bill, a bill that would have limited foreign media ownership in the country and harmed the most watched independent news organization in Poland.  Thank you, President Duda.

My personal hero, President Joe Biden, is thankful as well.  He recognizes the integral role a free press plays in building a prosperous, resilient and free society because, and I quote, “Journalists uncover the truth, check the abuse of power, and demand transparency from those in power.  They are indispensable to the functioning of democracy.”

And right now, I can think of two places where this work is desperately needed, and where Poland is an important partner:  Ukraine and Belarus.

The buildup of Russian troops along Ukraine’s borders made an already risky job for journalists even more difficult.  The United States has been steadfast in working towards de-escalation.

One way to do that is by helping to get the truth out there.  Journalists, that’s where you come in.  Our colleagues at the U.S. Embassy in Ukraine have worked with local partners to organize press tours for international journalists, to tell the stories that matter, the stories that the world needs to hear.

Last month, six Polish journalists participated in the tour. Here’s just some of what they uncovered.

Powerful.  More of these tours are planned in the coming months.  We will continue to arm journalists with the tools they need to tell their stories.

I’m pleased to note that we are doing this in Belarus too, alongside the Polish government and others.  I’m so proud to say the U.S. Diplomatic Mission in Poland is helping support the work of several independent Belarusian media outlets.

These organizations have had their headquarters in Poland for years due to Lukashenka’s repression.  They were forced to move most of their Belarus-based journalists and staff out of the country.

This comes after the brutal crackdown on media freedom following the disputed Belarus presidential election in August of 2020.

Under the Lukashenka regime, Belarus has become the most dangerous country in Europe for journalists.  The Belarusian Association of Journalists and Viasna, a human rights organization in Minsk, are tracking political prisoners held by the regime.

They list 33 media members, with many others detained just for subscribing to or commenting on media.  Nearly every day, new media outlets are being labeled as extremists.  This war on independent media has to stop.

Despite all of this oppression, Belarusian journalists haven’t given up.  That they still exist and can deliver truth to the people of their country is no small success.

These journalists, and the people they serve, have hope that they will be able to return one day to a free and democratic Belarus.  The United States stands firmly by their side.

I’m proud that we have continued to work together with likeminded countries, such as Poland, to advocate for journalists who play such an integral role in the democratic process.  You are in fact pillars that support the entire system and a prerequisite for the rule of law.  It’s all connected.

This of course is an ever-evolving issue.  The global debate about freedom of speech now includes the role of disinformation and misinformation spread by governments and nongovernmental actors alike.

There is no shortage of special interests, some with malign intent, seeking to influence readers through manipulation of emotional reactions to controversial topics.

The debate has expanded to include social media companies’ central role as the seemingly unavoidable host for much of this communication.  Some stand accused of censorship for enforcing their terms of service agreement when they identify what they see as misinformation and disinformation.

In reaction, arguments have been made for increased regulation of social media giants, while others demand they do more to curtail misinformation and hate speech.  Some favor self-regulation by the companies and say it is not even clear whether governments need to be involved in the discussion about what private companies should or should not host or publish.

It’s complicated.  These issues exist everywhere, including in the United States.  In the digital age, the debate around freedom of the press and free speech has morphed into something much different than it was just 20 years ago.

In order to tackle the challenges that lie ahead, we must work together to foster media freedom.  It’s a fight that needs to happen for the sake of democracy, for the sake of the heroes that have sacrificed so much to uncover the truth.

Thank you again for having me today, Bartosz.