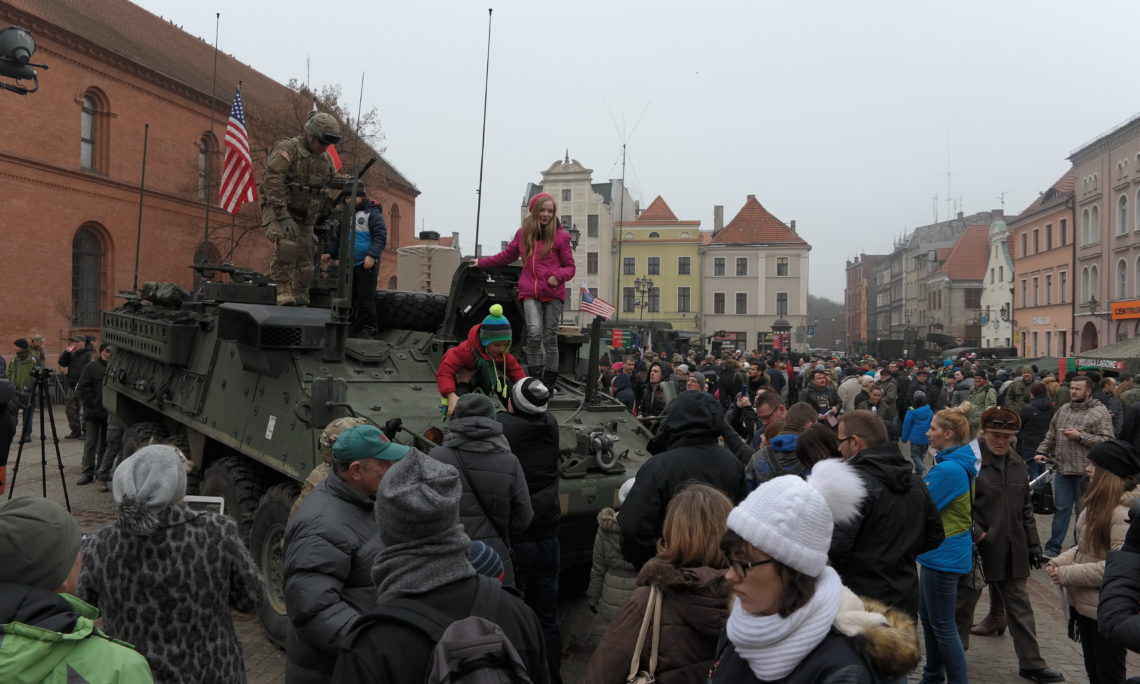 On Saturday, February 6, 2016, at 10:30 AM, American Army troops from the 2nd Cavalry Regiment met with residents of Toruń at the New Market Square.  Toruń residents were able to talk to American soldiers and see American military equipment up-close, including M777 Howitzers, Humvees and support vehicles.  Polish soldiers from the Artillery and Armored Training Center in Toruń also took part in the event and present Polish Army equipment.

These 2nd Cavalry Regiment troops are in Poland for exercise “Dragoon Shock,” an emergency deployment readiness exercise that U.S. Army Europe is conducting from January 31st through February 15th.  Soldiers assigned to Cobra Battery, Field Artillery Squadron, 2nd Cavalry Regiment are driving with their equipment from Rose Barracks, Germany, through Poland to the Pabrade Training Area in Lithuania. They stop at the Toruń Artillery Training Area in Poland on February 5 – 13 to conduct gunnery training.

The goal of the “Dragoon Shock” is to demonstrate NATO forces’ freedom of movement along NATO interior lines, as well as the U.S. commitment to NATO security. This exercise is part of Operation Atlantic Resolve, a demonstration of continued U.S. commitment to the collective security of NATO and to enduring peace and stability in the region, in light of Russia’s illegal actions in Ukraine.  Similar community events with American troops were organized in Poland several times over the past year.  Pictures from those events can be found here:  Białystok, Drawsko Pomorskie, Sandomierz, Rzeszów, Toruń.