Home Strona główna / News & Events / Study in the US? Apply for an Athletic Scholarship! 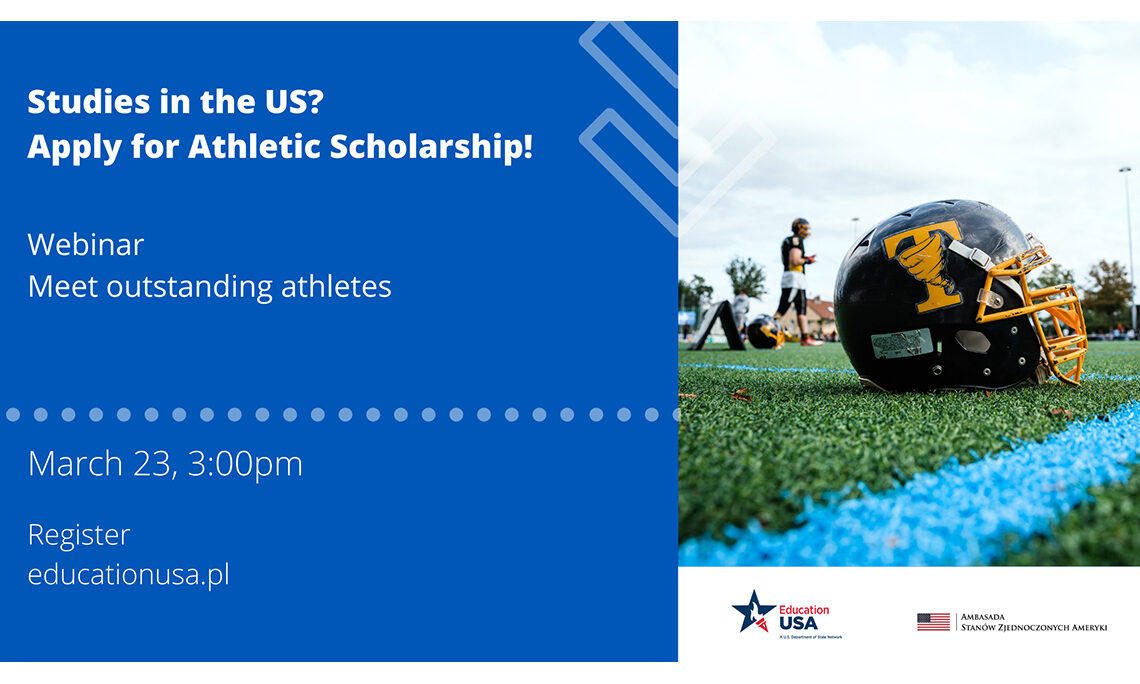 The U.S. Embassy and EducationUSA Poland are inviting students interested in studying in the U.S. to a webinar “Study in the US? Apply for an athletic scholarship!”. The event will be held online on March 23 at 15:00 and will include a presentation on the application process by Patrycja Donaburska, EducationUSA and Q&A discussion with the Polish alumni students who in the past were the recipients of the athletic scholarships in the U.S., namely: Joanna Kaczor-Bednarska, volleyball player, Adam Hrycaniuk and Tomasz Gielo, basketball players and Stanisław Zawieja, American football player. Students interested in joining the webinar are requested to fill out a registration form by March 22: https://cutt.ly/dlIp3im

Tomasz Gielo (born January 4th 1993 in Szczecin) – professional basketball player playing in the Spanish ACB league, member of the senior national team. At the junior level was an important piece to a team that finished 2nd at the U17 World Championship in 2010, which is considered the biggest achievement at the junior level in history of Polish Basketball. Spent 5 years studying in the US, first got his Bachelor Degree in International Business at Liberty University (VA), then began his grad school at the University of Mississippi (known as Ole Miss). During his time in college, he has been elected multiple times as one of the scholar athletes for combining good results both on the basketball court and in the classroom. Additionally, in 2016 he was elected to the SEC Men’s Basketball Community Service Team for the work done within his community. Outside of the basketball court, he is one of the founding members of the Basketball Players Association in Poland, an investor and a lover of books and exotic cuisine.

Adam Hrycaniuk was born on March 15, 1984 in Myślibórz, Poland.  Currently he is a basketball player of Asseco Arka Gdynia and a longtime Polish National Team member.  He began his career with Spójnia Stargard at the age of 15. In 2004 Adam attended a Polish Shootout Basketball Camp in Warsaw, where coaches from United States scouted young players. As a standout player during the camp, Adam received an athletic scholarship from Barton County Community College in Kansas State. In his second year he switched to Trinity Valley Community College in Texas and was selected to the All-Region XIV squad. Then an offer came to play in NCAA Division. This brought Adam to the University of Cincinnati, where he studied for 2 years and obtained a BA in Criminal Justice. After graduation Adam came back to Poland and joined Asseco Prokom Gdynia team winning four Polish Championships in a row and participated in Euroleague, where in 2010 Asseco Prokom reached TOP 8. He also played in Russian VTB league. At the end of 2012-2013 season Adam transferred to Valencia Basket Club in Spain. In 2013 Hrycaniuk signed a contract with Zastal Enea BC Zielona Góra. With this team he won three Polish Championships, Polish Vice-Championship and played in Euroleague, Eurocup, Basketball Champions League and VTB. In 2019 Adam resigned with Asseco Arka Gdynia and represents that team till this day. Adam Hrycaniuk is a member of the Polish National Basketball Team since 2010. With the National Team he took part in the European Championships in Lithuania 2011, Slovenia 2013 and Finland 2017. In 2019 Polish National Team played at the World Cup in China where they took 8th place in the overall standings. Adam is married to Aneta Hrycaniuk and has a daughter named Nel.

Joanna Kaczor-Bednarska a former Polish Womens Volleyball National Team player, participant of the Olympic Games Beijing 2008, bronze medalist of European Championship 2009, Two time Polish Champion (2009, 2011). NJCAA Player of the Year in her 2005 freshman season after the team went 50-2 to win the NJCAA national championship, transferred to USC in 2006, NCAA semifinalist and a two time All-American. Currently works for Polish Anti-doping Agency POLADA, PolsatSport as an expert and comentator and is a Regional Manager of Akademia Siatkówki Kadziewicz, Siezieniewski, Dobrowolski. In 2006 graduated from the College of Southern Idaho with a degree in Liberal Arts. In 2008 obtained an undergrad degree in sociology at the University of Southern California.

Stanisław Zawieja (born March 20th 1997 in Poznań, Poland) – the first Polish-trained athlete to get a scholarship to play college football in the United States. Stanisław started his career by playing in Poznań and Toruń in the youth league, he then represented Poznań by playing in the highest division in Poland. At the age of 18 Stanisław moved to Florida to play high-school football for the International School of Broward. After a year in South Florida, Stan signed with Waldorf University in Iowa, where he got a football and an academic scholarship. During his four years of playing as an offensive lineman, Stan was named the Daktronics NAIA Scholar-Athlete and was inducted to the 2020 NFF Hampshire Honor Society. After he graduated from Waldorf with a business major and a mathematics minor, Stan is currently pursuing a Business Analytics master’s degree at Norges Handelshøyskole in Norway.