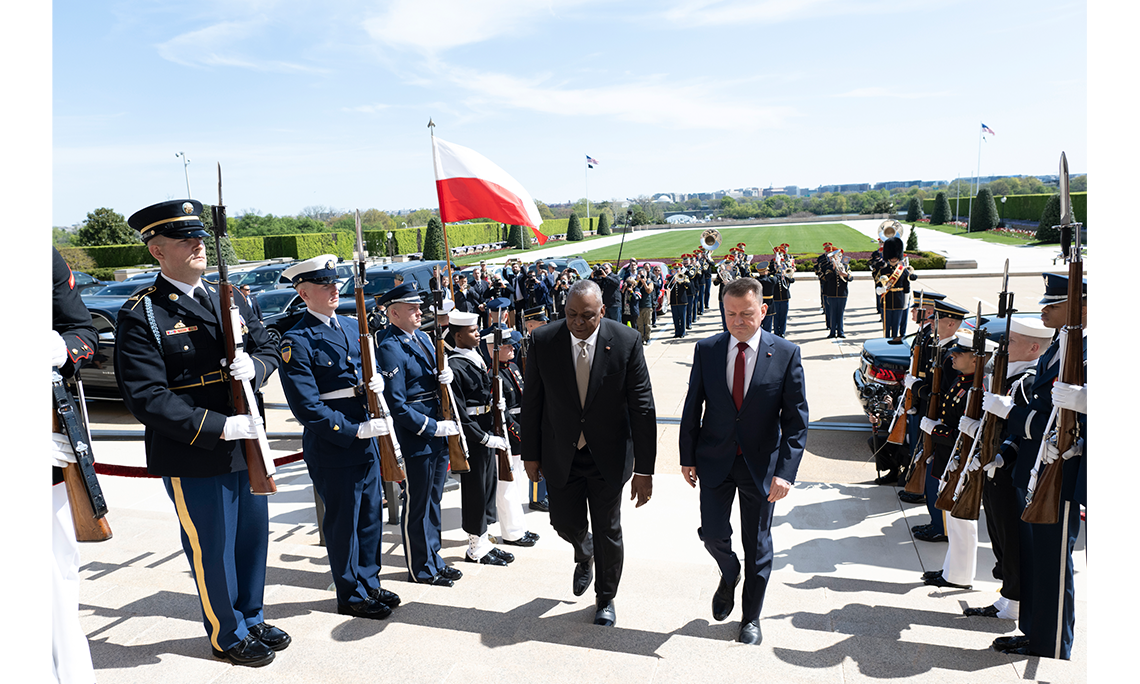 You know, in mid-February, we met in Warsaw before the start of President Putin’s unprovoked and illegal invasion of Ukraine. At the time, I remarked on Poland’s long history of fighting for its independence and helping others fight for theirs. I’m reminded once again of the old Polish saying: For our freedom and for yours.

And Mr. Minister, Poland has once again demonstrated that spirit in the past two months since the invasion. You have helped the Ukrainian people fight for their country and escape from the horrors of war. You have provided much-needed security assistance to the Ukrainian military to help it continue to successfully fight back invading Russian forces, and you have performed the absolutely essential role of facilitating the delivery of security assistance from the United States and other NATO Allies and partners from around the globe. Perhap — perhaps most importantly, the Polish people have opened their hearts and their homes to millions of Ukrainians fleeing the violence, and you’ve done it with grace and honor.

So Mr. Minister, please accept my sincerest thanks for what you and your country are doing to assist Ukraine in defending its freedoms and the freedom of Europe. I look forward to discussing the ways in which we can further strengthen our close partnership in this and other important areas.

POLISH DEFENSE MINISTER MARIUSZ BŁASZCZAK: Thank you, sir. Mr. Secretary, thank you for hosting me today in Washington, D.C. Being here is always a great opportunity to discuss the most urgent security challenges in the Europe (inaudible) arena and to advance with Polish-American defense cooperation.

It is to my great satisfaction that relations between Poland and the U.S. are stronger than ever. Our recent engagements and numerous meetings speak to that clearly. President Biden’s visit last month was yet another very magnifical occasion for us to discuss security situation in our region and continue the developing U.S.-Polish bilateral defense relations. I appreciate this cooperation, especially nowadays when we experience Russian invasion and atrocities in Ukraine. This unjustified and unprovoked war is a Russian attempt to shake and fracture the foundations of Europe (inaudible) corridors and it provides us with major challenges to the Polish, European and Allied security. With great concern, we’re observing every day Russian attacks in Ukraine. I trust that Russia will be held accountable for all its war crimes, especially acts of genocide against civilian population.

I am grateful for the U.S. engagement and commitment in solidifying Allied posture against this war. Strengthening of NATO’s eastern flank, including the deployment of additional troops to Poland and support for — for NATO response forces is a proof of the U.S. reliability and steadfast assurance of the American dedication to safety of NATO’s European partners. I believe that the U.S. active defense policy and leadership is crucial in preventing the Kremlin from any hostile acts against NATO members.

We are proud to host American troops, which help develop our defensive bonds even farther. I would like to maintain this momentum, as this cooperation also translates into strengthening industrial and economic talks. Just — just this month, I signed the agreement for the acquisition of 250 latest-generation Abrams tanks. I am convinced that this contract will enhance the interoperability of our land forces and enhance Polish capabilities as NATO’s front (inaudible). Mr. Secretary, thank you for your personal involvement and support for this agreement.

Poland considers its security very seriously; thus, in the view of Russian invasion on Ukraine, we have already implemented a new law which will facilitate the strengthening of our armored — armed forces. It will increase our defense budget up to three percent GDP from the next year on. This effort is tremendous, and it requires investments in many areas. I trust that the close collaboration with the U.S. will support this reinforcement plan not only for the sake of Poland, but also to enhance overall NATO’s ability to tackle today’s and tomorrow’s threats.

Although we work intensively to enhance our defensive capabilities, our main focus these days is on Ukraine. I trust that allied and united, we can preserve NATO’s integrity and provide the required level of support to Ukraine to stop Russian aggression. Thank you.