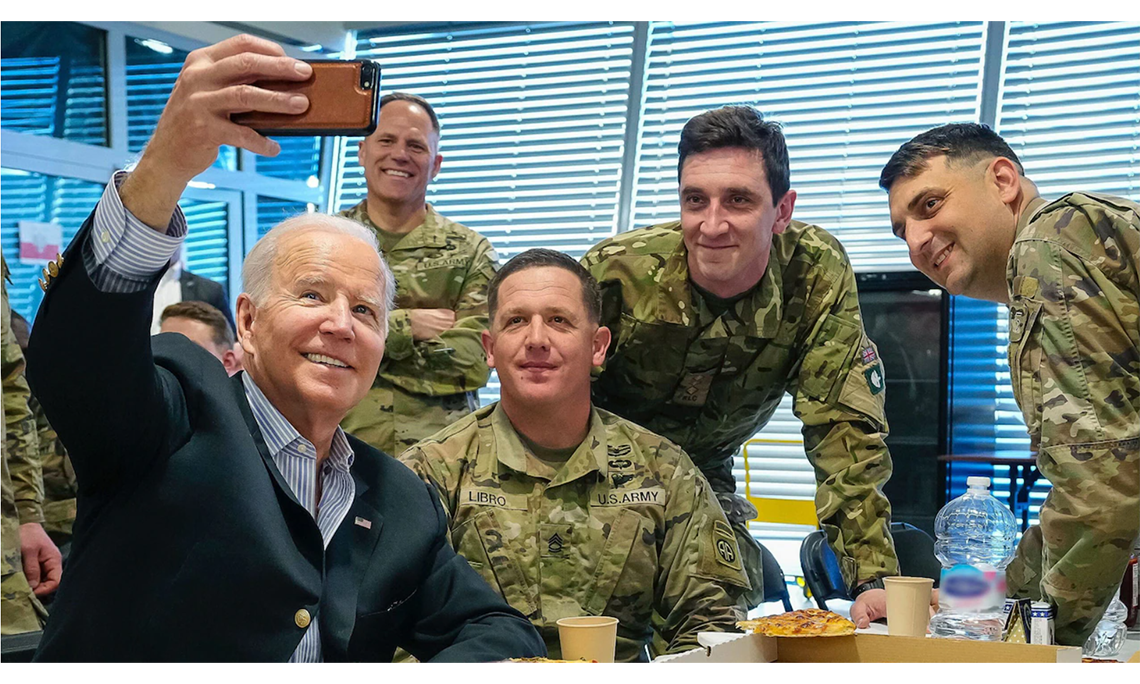 Anyway, thanks for letting me come and say hello to you all.  You know, I’ve been saying this a long time — and the people who travel with me know that because I was a senator for 36 years, the Foreign Relations Committee, traveled around the world, and 8 years as Vice President, and now President.

Sounds corny, but it’s the truth of who we are.  We’ve never lived up to it, but we never walked away from it.  And the rest of the world looks to us.  Because, you know, we not only lead by the example of our power, but by the power of our example.  And your generation combines both.

The rest of the world looks at you and sees who you are.  They see you are a multi-ethnic group of Americans that are, in fact, together and united into one so- — resolve: to defend your country and to help those who need help.  That’s why you’re here.

I spent a lot of time in Ukraine when I was a senator and Vice President.  I’ve spoken to the Rada in the days when they, in fact, didn’t have what you’d call a democracy, and was there in the Maidan when the former leader had to take off and head into Russia.

And — so, you know, with the Ukrainian people — Ukrainian people have a lot of backbone.  They have a lot of guts.  And I’m sure you’re observing it.  And I don’t mean just their military, which is — we’ve been training since back when they — Russia moved into the — in the southeast — southeast Ukraine — but also the average citizen.  Look at how they’re stepping up.  Look at how they’re stepping up.

And, you know, the woman who just died — the Secretary of State — used to have an expression.  She said, “We are the essential nation.”  It sounds like a bit of a hyperbole, but the truth of the matter is you are the organizing principle around which the rest of the world is — the free world is moving.

We’re in the midst of — and I don’t want to sound too philosophic here — but you’re in the midst of a fight between democracies and oligarchs.  Xi Jinping — who I’ve spent more time with, they tell me, than any other world leader — points out to me that he believes, in China, that democracies can’t succeed in the 21st century.  The reason is things are moving so fast, change is happening so quickly that democracies require consensus and we can’t put together consensus as quickly as autocrats can.

So what’s at stake — not just in what we’re doing here in Ukraine to try to help the Ukrainian people and keep the massacre from continuing — but beyond that, what’s at stake is: What’s — what’s — what are your kids and grandkids going to look like in terms of their — their freedom?  What’s happening?  The last 10 years, there have been fewer democracies that have been formed than we’ve lost in the world.

So this is — what you’re engaged in is much more than just whether or not you can alleviate the pain and suffering of the people of Ukraine.

We’re in a new phase — your generation.  We’re at an inflection point.  About every four or five generations, there comes along a change — a fundamental change takes place.  The world ain’t going to be the same — not because of Ukraine, but — not going to be the same 10, 15 years from now in terms of our organizational structures.

Part of the reason is you’ve had to fight so much for the last 20 years.  It’s for real.  There’s not many generations — you know, the Greatest Generation was my father’s generation, your grandparents’ generation — World War Two generation.  But nobody — no other generation has had to be in a battle, have your buddy blown up, wipe the blood off the HMMWV, and get back in and saddle up and go for another six months.

One thing to go in and be in the middle of a battle, go home, and get sent back again.  And so, one of the things that I’ve said — and I’ve gotten in trouble for saying it, but not anymore — I’ve been saying it since I got elected: We have a sacred obligation — only one obligation in this government.  We have a lot of obligations to the elderly, the poor, children, et cetera, but only one sacred obligation: to equip those that we send to war and to care for them and their families when they come home.

And so, you all are amazing group of women and men, and I just want to thank you for your service.  As your Commander-in-Chief, I mean it from the bottom of my heart.

And as I said, it’s not new to me.  I — my son spent a year in Iraq.  He spent six months in Kosovo.  He won the Bronze Star, the Conspicuous Service Medal, and other awards.  Proudest thing he ever did was put that uniform on.

Like many of you, he didn’t have to go either.  He was the Attorney General of the State of Delaware and in the Delaware National Guard.  And what happened was, when his unit was going to be sent overseas, he had to go to Washington to get a — an equivalent of a dispensation because you either had to be federal property or state property.  He was the Attorney General of the state; he had to give up the office in order to be able to go with his troops.

The reason why, when the general — when the Secretary of State asked me if I’d send another 12,000 troops along to the United States, I said, “Yeah” — from the United States — we have 100,000 American forces here in Europe; we haven’t had that long, long time — because we are the organizing principle for the rest of the world.

And I said, “We’ve sent the best — the best available in America.”  And that’s all of you women and men.

And as my grandfather would say every time I walked out of his house — he’d yell at me, “Joey” — in Scranton — he said, “Keep the faith.”  And my grandmother — my grandmother would yell, all kidding aside — this is serious — she’d yell, “No, spread it.”  You’re spreading the faith.