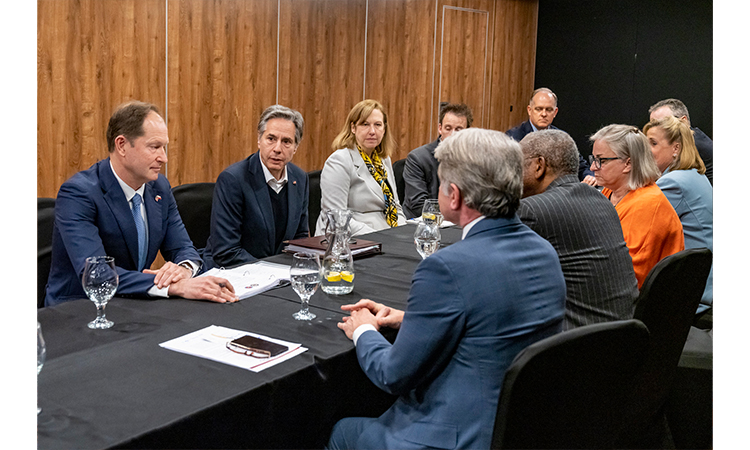 SECRETARY BLINKEN:  Well, greetings, everyone.  I’m particularly pleased to be here with friends and colleagues from the Congress.  This is, as always, very powerful to see a bipartisan group of leaders from Congress standing together, coming together in support of Ukraine, and standing strongly against Vladimir Putin’s war of choice and aggression that is not only – is first and foremost affecting the people of Ukraine, but poses a threat to the basic principles of the international order that all of us stand strongly for.  And we – I think we’re determined – as Republicans, as Democrats, as Americans – not to let this go with impunity.

So I think the fact that our colleagues are here with this strong show of support from the United States here in this moment at this time is a very powerful thing, and it’s just wonderful to be with you.

STAFF:  All right, thanks, guys.

CHAIRMAN MEEKS:  As you said, bipartisan group – many more members of Congress wanted to come.  We completely filled our plane, because we wanted to make sure that – number one, we wanted to say thank you to the Polish people.  The humanitarian concerns that they have had wreaked on them – now they’re able to help someone else.  And I thought, we all thought that it was extremely important for members of the Congress, in a bipartisan way, to come to say thank you and that we know – for those that had to leave their homes in Ukraine because of one man who decided that he’s going to make and commit war crimes, killing innocent men, women and children – that we wanted to also let them know that the United States has their back.  And we’re going to stay together.

So we’re definitely going to make sure that the – our NATO Ally here in Poland, we have your back.  We’re not going to leave you alone, and it’s a message united.  Mike McCaul is the ranking member – I’m the chair of the House Foreign Affairs Committee; he’s the ranking member.  Mike, why don’t you say something?

RANKING MEMBER MCCAUL:  Well, (inaudible) we’re not here as Republicans or Democrats, but really as Americans supporting our NATO Ally, Poland, and the people of Ukraine.  We stand with you.  We just had a video conference with President Zelenskyy, one of the most courageous individuals I’ve ever seen.  Very inspiring.  And the chairman’s right:  Mr. Putin is a war criminal, he’s going to lose in the end, and we want to work with you and the administration to bring this to a – bring him to justice and stop the bloodshed.  And again, I just want to thank Poland and the people of Ukraine.  We are with you, and we will do everything we can to stop this.