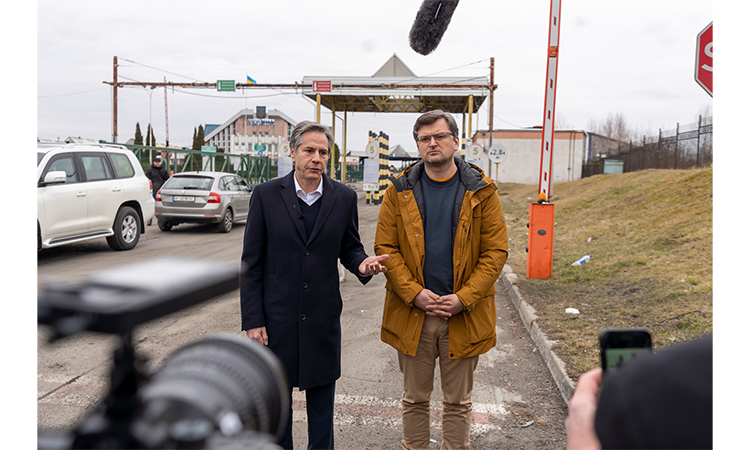 SECRETARY BLINKEN:  Good afternoon, everyone.  The entire world stands with Ukraine, just as I am standing here in Ukraine with my friend, my colleague, Dmytro Kuleba, the foreign minister of Ukraine.  We’ve seen an extraordinary surgence of support from around the world against Russia’s aggression – against Russia’s war of choice, against what is happening every single day, every single minute in Ukraine to civilians throughout the country as a result of this aggression – but also extraordinary support for Ukraine itself.

We’ve come from several days of meetings with NATO, the European Union, countries beyond the G7, and we see that support not only continue – security support, humanitarian support, economic support – but that support will increase.  And as to the pressure on Russia, not only is it unprecedented, not only is it producing very, very concrete results in Russia, but that pressure too will not only continue – it will grow until this war, this war of choice, is brought to an end.

FOREIGN MINISTER KULEBA:  Thank you.  Well, first of all, I would like to thank Tony for coming here to Ukraine – literally – we just crossed the line and we are standing here.  I hope the people of Ukraine will be able to see this as a clear manifestation that we have friends who literally stayed – stand by us.  Thank you for your leadership in consolidating international community in support of Ukraine.  We had meaningful discussions about weapons, about sanctions, about isolation of Russia on the international arena.

And the message that I have to convey, that I would like to convey now, is very simple.  Ukraine will win this war anyway, because this is the people’s war for their land, and we defend the right cause.  The question is the price, the price of our victory.  And if our partners continue to take bold, systemic decisions to step up economic and political pressure on Ukraine, if they continue to provide us with necessary weapons, the price will be lower.  This will save many lives in Ukraine, many houses.  Many children will be born.  Many sufferings will be avoided.  This is the only question that is on the agenda.  If anyone in the world one day starts feeling the sanctions fatigue, for example, then people – more people in Ukraine will be dying, suffering, and more destruction will be brought on us by Russian airplanes and by Russian weapons.

So we appreciate everything that has been done in the last week – unprecedented, swift reaction to the Russian aggression.  But it has to be continued, the pressure has to be stepped up, and Ukraine has to be provided with all weapons necessary to fight in this, as Tony said, war of choice of President Putin.  Thank you.

QUESTION:  Minister, what kind of weapons do you need from the U.S. that you aren’t getting?

FOREIGN MINISTER KULEBA:  Well, we are satisfied with the already-arranged supplies of anti-tank weapons and ammunition – this is one of the most badly needed – and we destroy a lot of Russian tanks and armored vehicles using weapons that came from our friends, including the United States.  It’s no secret that the highest demand that we have is in fighting jets, attack aircrafts, and air defense systems. We thank all those countries, including the United States, who provided us the – with Stingers.  We effectively use them, and just today we shot down three Russian attack aircrafts, which were bombing our cities, with the use of Stingers.  But we need to, how to say, big air defense systems to ensure the safety of our skies.  If we lose the skies, there will be much, much more blood on the ground, and that will be the blood of civilians.  And I don’t want anyone to share responsibility for their blood, anyone in the world to share responsibility for their deaths and suffering.

QUESTION:  Sir, are you still calling for a no-fly zone?

FOREIGN MINISTER KULEBA:  Yes, yes, and we will continue to call.  I understand – I hear the messages.  I heard was the NATO secretary general said yesterday after the meeting of the Allies.  I regret – I think it’s a sign of weakness by – of NATO.  We’ve been saying many things for the last eight years about Russia, about intentions.  We were never heard.  Everyone was saying you’re – many were saying: you’re exaggerating; this is not going to happen.  People were – then at certain points, some countries were saying: no, we can never supply you with weapons.  But in the last eight days, the world politics were shattered by the Russian aggression against Ukraine, and those countries who had never supplied us with weapons are now doing so.

So I’m used to it.  We are now in the phase where NATO is saying: no, we’re going to not – we are not going to do that.  The time will come.  It’s, again, the issue of price.  We do not – it’s Ukrainians, it’s the people of Ukraine who pay the price for the reluctance of NATO to act.

QUESTION:  Mr. Minister, could you tell us how the talks with the Russians are going, how any kind of negotiations are going?  And also, when you talk about the cost, even at what point that the fighting ends, what kind of country will the – Ukrainians go back to?  What will it look like?

FOREIGN MINISTER KULEBA:  Ukrainians will go back to the country to some – to a large extent destroyed by Russian bombers and artillery and rockets.  But then we will roll our sleeves up and we will build an even more beautiful country.  We are all committed to that and we will all take part in that.

When it comes to the talks with Russians, I cannot say that there is any progress in it.  We all hope that the humanitarian corridors, which were agreed upon during the last talks, would work.  Unfortunately, at least as we speak, they – these humanitarian corridors are not available because of the Russian fire and shellings.  But every war ends with diplomacy and with talks, so we have to continue talking, but we are not going to these talks to accept Russian ultimatums.  Again, trust me, thousands of people in Ukraine sacrifice their lives – men, women, old, young – to defend the country.  When we prevail – and I have no doubt in that – we will build a new Ukraine, and that country will be even better than the one that Russia destroyed.  Thank you.

MR PRICE:  Thank you all very much

SECRETARY BLINKEN:  We are talking about and working on everything.  We’re doing that; Secretary of Defense Austin and his counterpart Mr. Reznikov are doing that.  We are, again, looking at everything, and as I said before, the support for Ukraine not only has been unprecedented, not only is it going to continue – it’s going to increase.  And what we’ve seen, I think, as Dmytro said, is a sea change, and a sea change that’s being shown around the world in terms of its support.  There’s a very, very strong tide in support of Ukraine and against the horrific aggression committed by Russia.

Putin has made a terrible, terrible, terrible mistake in many ways, but it starts with the proposition that somehow Ukraine doesn’t exist as an independent country.  What Ukrainians are showing every single day is, of course, exactly the opposite.  And ultimately, their strength, their resolve, their determination, backed by the United States and backed by the world, is going to prevail.  It’s as simple and straightforward as that.  But Dmytro’s right: at what price?  We want to do everything we can to make sure that that price is as low as possible and that this happens as quickly as possible, but we’re in it with Ukraine one way or another.  The short-run, the medium-run, the long-run. We’re in this together. We will succeed together. Ukraine is going to prevail.