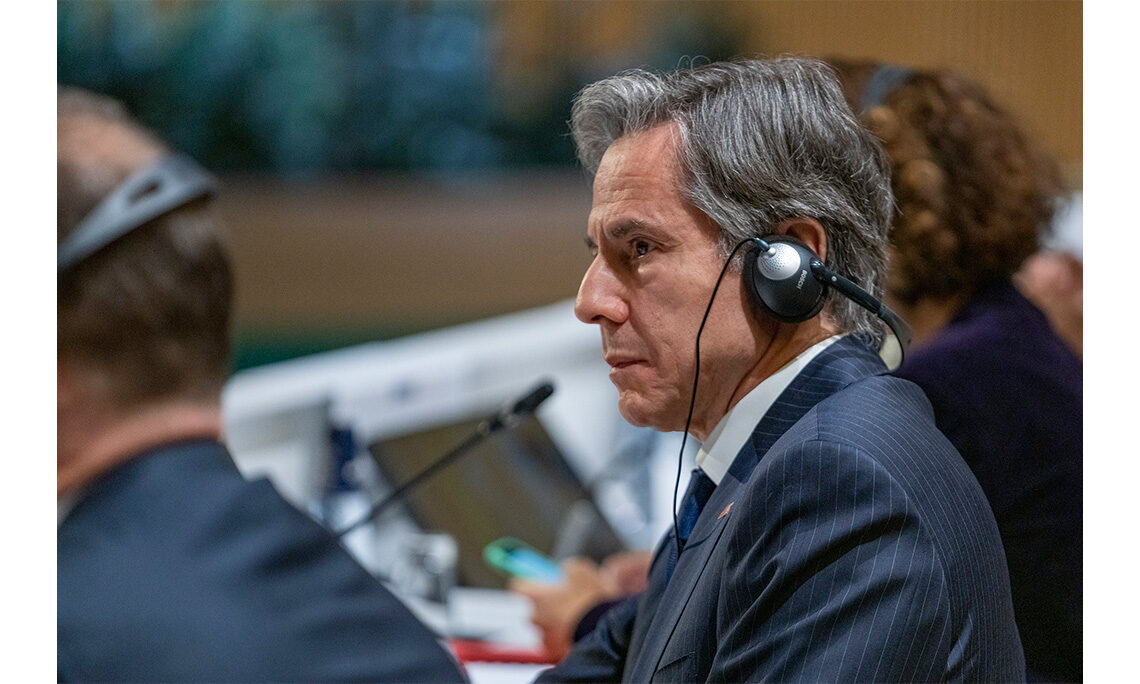 SECRETARY BLINKEN:  Ann, thank you so very much.  Thank you for today.  Thank you for the last year for your leadership as the OSCE chairperson.  And thank you as well to the OSCE Secretary General Helga Schmid, wonderful to be with you again.  The United States deeply appreciates the work that you’ve done and we also fully support the incoming chair – Zbigniew, congratulations, I think – (laughter) – as Poland takes the helm in 2022.

The OSCE’s comprehensive approach to security and the fundamental wisdom and integrity of the Helsinki Principles are as relevant now as they were when enshrined more than 40 years ago.  Lasting peace and prosperity require respect for both the sovereignty and territorial integrity of countries and the human rights of all people.  This flows directly from the UN charter and the Universal Declaration on Human Rights, which are the foundational documents of the rules-based order, which is not a Western construct but the best guarantor of peace, security, and progress for all of us.

Just as there is a connection between freedom and stability, so is there a connection between domestic repression and cross-border aggression.  We’ve seen how countries that systematically violate human rights at home sow instability in other countries, and how rulers who abuse their power and ignore the rights of their people give license to leaders in other places to do the same.

Right now, despite the steadfast efforts of the OSCE, democratic values, human rights, civil society, independent media, the rule of law are all facing a significant challenge across many of our countries.  Belarus continues to break international law and OSCE commitments.  We again call on Belarusian authorities to cease their violent crackdown, release all political prisoners, heed the demands of the people for free and fair elections under independent observation, and cease the outrageous weaponization of migration.

Russia unfortunately continues to violate the Helsinki Principles and repeatedly obstructs the work of this organization.  It’s responsible for the perils confronted every day by the OSCE Special Monitoring Mission in Ukraine.  The seizure by force of Crimea has brought relentless abuses against Crimean Tatars, ethnic Ukrainians, and others who peacefully oppose this occupation.  And as I said yesterday at the NATO foreign ministers meeting, we are deeply concerned by evidence that Russia has made plans for further significant aggression against Ukraine, and so we call on Russia to respect Ukraine’s sovereignty and territorial integrity to de-escalate, reverse the recent troop buildup, return forces to normal peaceful positions, and to implement the Minsk commitments, especially the ceasefire provisions and those allowing OSCE monitors unfettered access.

Additionally, we’ve seen a flouting of conventional arms control commitments in Europe.  Russia maintains forces in Georgia and de facto authorities in Abkhazia and South Ossetia.  Russian troops remain entrenched in Moldova without Moldova’s consent.  And at home, Russia has cracked down on civil society organizations, the latest being key branches of a very respected human rights group, Memorial, as well as independent media.

In the Caucasus, we do welcome the resumption of direct dialogue between the governments of Armenia and Azerbaijan, and we urge them to make progress on humanitarian issues including detainees, demining, missing persons, with investigations of alleged human rights abuses and violations of international humanitarian law with the perpetrators held accountable.  And I hope there, we can all work together including with Russia to continue to make progress.

We urge all parties to resolve other outstanding issues like border delimitation and demarcation, the restoration of economic and transport links, and to continue to engage with the Minsk Group co-chairs for a lasting peaceful end to the Nagorno-Karabakh conflict.

We all share an interest in ensuring Afghanistan is never again used as a base to plan terrorist attacks against our countries and our people.  Enhanced border security cooperation with our Central Asian partners will be vital.  We’ll continue to support the OSCE’s engagement through its field presence in Central Asia and its programs on counterterrorism, democratization and human rights, border control, and management.

And in the coming year, we must work together – we must work together to strengthen the OSCE because its work is vital and has to be advanced.  That means, among other things, modernizing the Vienna Document to help deepen trust, de-escalate tension, and rebuild military transparency among our countries.  And we have to ensure that the OSCE’s premier human rights review, the Human Dimension Implementation Meeting, is held in 2022 with robust civil society participation.

Next week – and I’ll conclude with this – President Biden will host a Summit for Democracy to bring governments and civil society from around the world together to respond to democratic backsliding and to build a stronger foundation for renewal and reform.  We believe in the power of democracies to make each other stronger and in the potential for countries that are not yet democracies to grow in that direction for the good of their people.

The OSCE with its many programs, its experts, its field missions, a long history of defending human rights as a core element of security, is a key forum for advancing that vision.  And I’m grateful for this opportunity to represent the United States today and to stand with this institution to strengthen peace, prosperity, and democracy across our region and around the world.  Thank you.