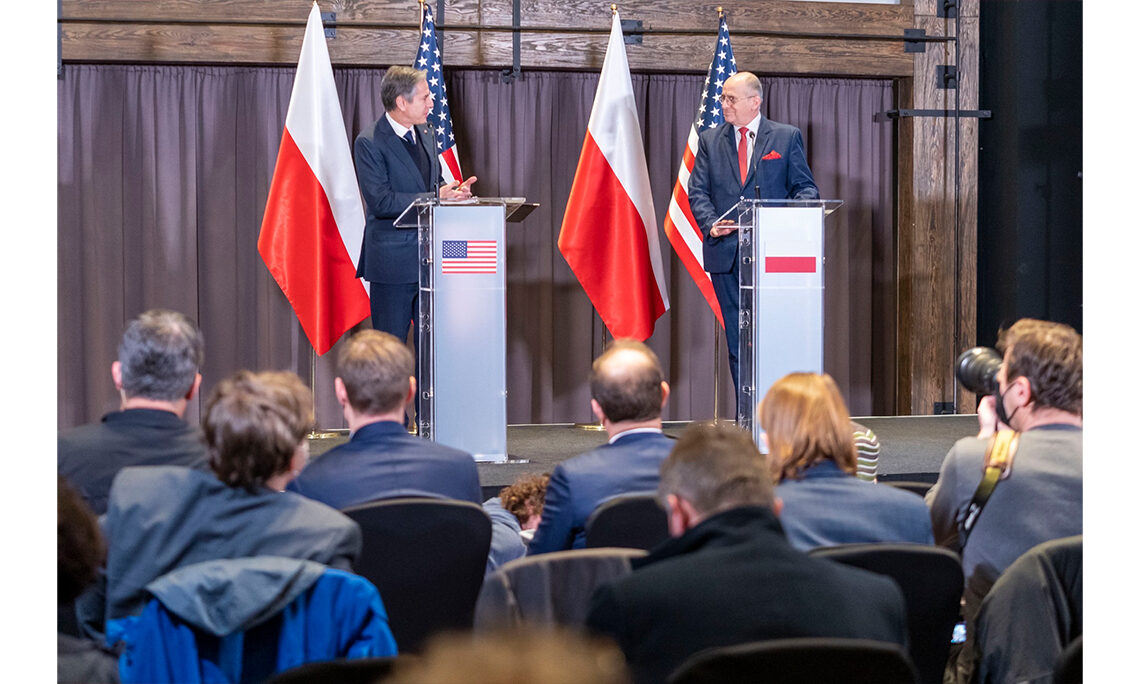 MODERATOR:  Ladies and gentlemen, time for statements, and – for information, there won’t be any questions after the statements because of limited time.  Minister Rau, floor is yours.

FOREIGN MINISTER RAU:  Thank you.  Ladies and gentlemen, we meeting – our meeting with Secretary, State Secretary Blinken, was devoted to coordinating actions in response to the Russian aggression against Ukraine, as well as political, economic, social, and humanitarian consequences of Russia’s war on our neighboring countries.  In the discussion with Secretary Blinken, we raised the most important issues arising from the ongoing conflict between Russia and Ukraine, Poland’s two eastern neighbors, both for Polish-American bilateral relations and for Allied cooperation between NATO, as well as for the coordination of political activities in the OSCE.

Poland will never recognize territorial changes brought about by unprovoked, unlawful aggression.  The way in which Russia conducts hostilities, based on the desire to break the will of Ukrainian resistance by means of attacks that terrorize civilian population – shelling residential areas, nuclear power plants, and non-military venues – are war crimes under international law which are not subjected to statute of limitation and will be prosecuted with utmost determination.

I call on Russia to refrain from attacks on civilian populations.  I call both parties to abide by international humanitarian law and to treat prisoners of war with dignity.  Turning over all war criminals must be considered in future peace negotiations.

Due to its own painful experience in the past, Poland will consequently demand prosecuting war criminals.  This is our historic debt to inhabitants of Guernica and (inaudible), whose sacrifices can never be forgotten.  Pursuing war criminals is an element of humankind’s common memory.  It’s our common obligation.  To achieve this, Poland (inaudible) center for documentation of war crimes in Ukraine.  We discussed possibilities for Polish-American cooperation in this area.

I call for an end of the bloodshed and ceasefire for the duration of the talks between Ukraine and Russia.  In my capacity as OSCE chairman in office, I welcomed understanding for recreation of humanitarian corridors that will facilitate the evacuation of civilians from Ukrainian cities under siege.  Along with the majority of OSCE countries, I appealed for this from the outset of the conflict.  I view this understanding as a ray of hope to prevent more Ukrainian civilians from falling victim to war.  Everything possible must be done to ensure they evacuate.

Russia’s aggression in Ukraine caused a humanitarian crisis of an unimaginable scale.  Our priority is organizing effective aid to hundreds of thousands and soon be millions of refugees.  Poland already received up to 700,000 refugees, and we will continue to do so for everyone that needs it, regardless of a nationality, race, (inaudible) religious creed.

The attack on Ukraine already transformed Europe and its sense of security.  Poland decided to immediately increase its defense spending budget to 3 percent of its GDP beginning next year.  As a key country for deterring and defending NATO’s eastern flank, Poland’s (inaudible) welcomed the Alliance’s swift reaction to the new strategic circumstances.  I’ve conveyed to Secretary Blinken my thanks to President Biden for his effective leadership in coordinating an explicit, united, and effective response from the transatlantic community and (inaudible) to Russia’s aggression.

As a host country for NATO response force on the eastern flank, Poland plays a critical role in this reaction, and we are determined to abide by it.  In line with the charter of the United Nations, Poland will provide all possible support to Ukraine, who is currently defending itself from an unlawful (inaudible) unprovoked aggression.  Thank you.

SECRETARY BLINKEN:  Thank you.  Zbigniew, I want to thank you as always for the very good exchange, for the very warm welcome.  And we were just at NATO together, we were in Washington together just a few weeks ago, and it’s very good to to be here with you.

I’m also especially pleased that Ambassador Brzezinski is now here in Poland, credentialed last month.  The timing could not be better.  It’s vital that we have all of our confirmed ambassadors in place at this critical time.

And we are, in fact, meeting at one of the most urgent moments in the long history of friendship between our countries.

As Allies and partners, Poland and the United States have stood together through many, many challenges.  Now the very ideals that bind us – freedom, democracy, peace, security – are under threat in this region as never before, certainly not since the Second World War.

The people of Poland know how important it is to defend freedom.  So do Americans.  And we will stand together, as we’ve been standing together, in support of Ukraine and against Russia’s unprovoked, unwarranted, premeditated invasion.

In NATO, the European Union, the OSCE – where Zbigniew is the chair in office this year – Poland is doing vital work to respond to this crisis.  It’s hosted an increased NATO presence.  It supported the robust EU sanctions against Russia.  And it has done a great deal to facilitate security assistance to Ukraine.

As NATO Allies, defense cooperation between Poland and the United States, I think it’s safe to say, is closer than it’s ever been.  Since January 30th, the United States has more than doubled the number of our military personnel deployed in Poland to now more than 10,000, including a brigade of the 82nd Airborne Division.  And we’ve significantly increased the amount and types of military equipment and capabilities that we’ve positioned in Poland. As President Biden has said, we will defend every inch of NATO territory.

Poland is also a leading responder to the humanitarian crisis that Russia’s invasion of Ukraine has sparked.  As Zbigniew just said, as of today, more than 700,000 people have been forced to flee the violence perpetrated by Russia by crossing the border from Ukraine to Poland, with more coming every single day.  I’m going to have the opportunity to speak to some of the folks who’ve come over just recently from Ukraine, but I have to say it’s an incredibly powerful reflection of Poland’s values that vulnerable people know that here, they will find refuge.

To help support the needs of Ukrainians in Poland and other countries, the Biden administration just requested of Congress 2.5 – excuse me, $2.75 billion in humanitarian assistance.  That’s both to meet the need of vulnerable people and communities inside Ukraine as well as to support refugee services, including here in Poland.  That’s in addition to the more than $54 million in humanitarian assistance to Ukraine that we announced just last week

We’ve delivered nearly 20,000 thermal blankets suited for cold climates; we’ve provided funding for emergency supplies to sustain health care for up to 100,000 people for three months and up to 500 emergency surgical procedures.

Embassy Kyiv has temporarily relocated to Poland as well, and I’m grateful for that, that Poland is hosting them.  They and our embassies and consulates in Poland and across the region are working hard to assist American citizens and their families departing Ukraine and to help them with the influx of U.S. military personnel, humanitarian workers, as well as assistance.  We established a U.S. Welcome Center close to the Ukrainian border.  It’s been operating 24/7 since hostilities began.  We have support teams as well stationed near the border in Romania, Hungary, Slovakia, and Moldova, to assist any Americans who are leaving Ukraine.

At this moment of crisis for millions of Ukrainians – and as the security of Europe hangs in the balance – Poland has stepped forward with generosity, with leadership, with resolve.  We’re grateful for the strong foundation of friendship and cooperation that we’ve built together over many, many decades, which so many are now relying on today.  Thank you.