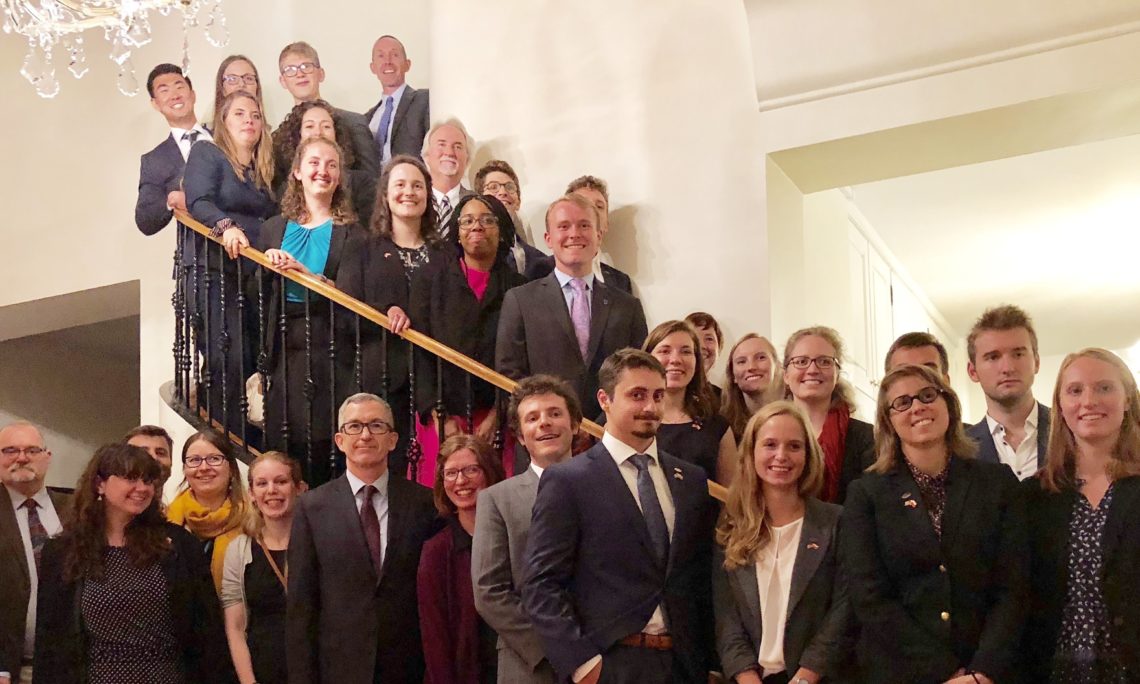 On September 26 at his residence in Warsaw, Deputy Chief of Mission Eric Green hosted 30 newly arrived American Fulbright Scholars from America who will spend the next academic year in different cities across Poland.  In total, 47 American Fulbright Scholars will teach and conduct research at Polish universities throughout the 2018-19 academic year.  Representatives of Polish universities who will host and help mentor the Fulbright scholars also attended the reception where the Deputy Chief of Mission thanked them for their warm welcome and support of the new scholars.

The 30 American scholars who have just arrived in Poland will be based at universities in Warszawa, Kraków, Gdańsk, Poznań, Bydgoszcz, Lublin, Wrocław, Białystok, Katowice, Koszalin, Łomża, Łódź, Opole and Sopot.  They will conduct research and scientific programs in such fields as astronomy, art, engineering, medicine, literature and many other areas.  Their profiles can be viewed on the Fulbright Commission: https://en.fulbright.edu.pl/current-american-grantees/. If you would like to invite them to your school please follow the procedures described on this website: https://educationusa.pl/zapros-nas/

Fulbright is the most widely recognized and prestigious international exchange program in the world.  It was initiated by U.S. Senator William Fulbright in 1946 with the aim of increasing mutual understanding between the people of the United States and the people of other countries through academic exchange.  So far over 380,000 students and scientists have participated in the program in over 160 countries.  In Poland, the Fulbright Program has offered scholarships since 1959 owing to joint financial support of both Poland and the United States. Since its inception in Poland, more than 4,000 Poles have participated in the Fulbright program.  Fulbright alumni around the world have achieved distinction in government, arts and science, business, philanthropy, education, and athletics.  They have won 59 Nobel Prizes and 84 Pulitzer Prizes while 37 Fulbright alumni have served as heads of state or government.

In Poland, Fulbright scholarships are addressed to researchers and students who want to pursue master or doctoral studies in the USA.

You can find more information about scholarships available to US students and scholars here: https://en.fulbright.edu.pl/grants-for-american-citizens/

Information about scholarships available for Polish students and scientists: