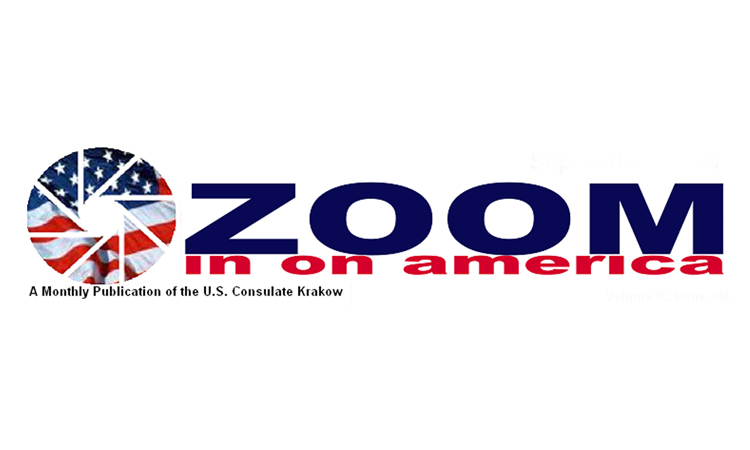 Zoom in on America

Publication about America for Students and Teachers of English

Zoom in on America is a monthly online publication of the US Consulate in Krakow which is addressed to all teachers and students of English who also want to read more about the United States: tradition, culture, nature, history and people.

Each issue includes an Activity page with reading comprehension, grammar and vocabulary exercises. Articles, exercises and graphic materials are complete with links to audio and video recordings which can be a great tool in developing listening and speaking skills.

Subscription is free and available to all. Write to: krakowairc@state.gov with “Zoom” in the topic line. 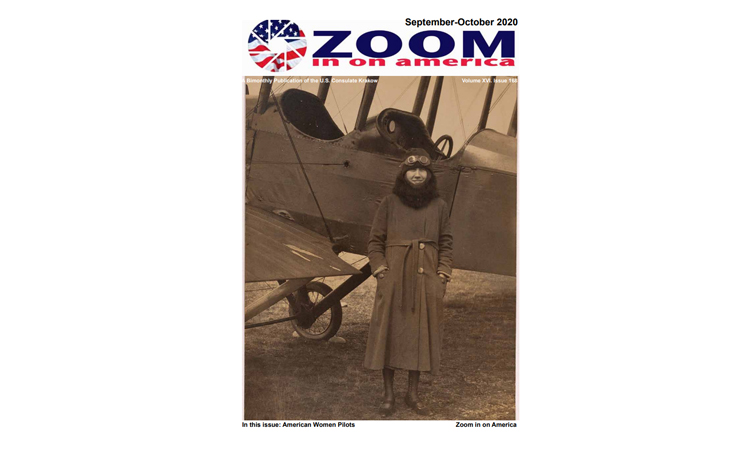 A hundred years ago aviation was still in its infancy. Pioneer inventors, builders and pilots were paving the road for the spacecraft of today. Enthusiasts had a chance to be the first person to fly, pilot a flying vehicle or parachute jump. Women had as much stamina, perseverance and enthusiasm to go up in the sky as men. In this edition of Zoom in on America we take a look at some of the women pilots of powered flying craft. 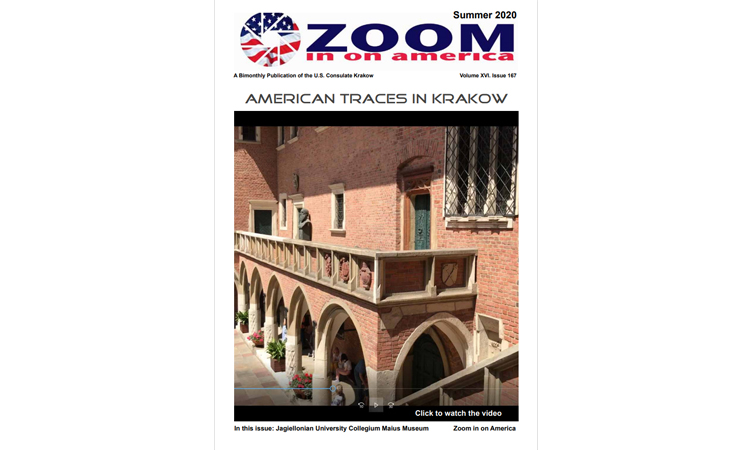 The Summer edition focuses on some of the Jagiellonian University Museum Collegium Maius artefacts connected with America. They include the Golden Jagiellonian Globe, one of the world’s oldest preserved globes on which America is marked, an Oscar statuette awarded to Polish film director Andrzej Wajda and many others. 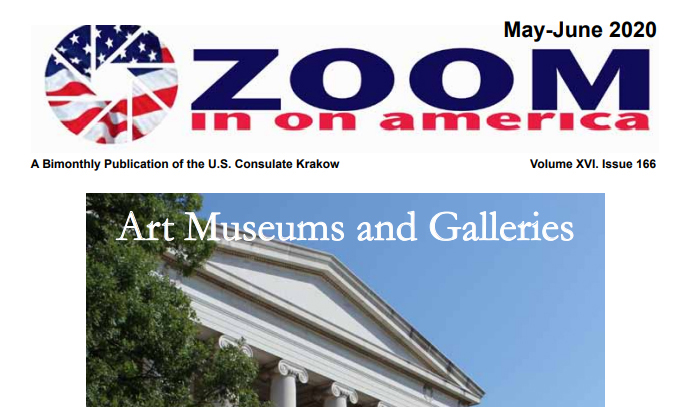 May-June 2020 issue of Zoom in on America

The May-June edition features some of the best art museums and galleries in the United States including the Metropolitan Museum of Art in NYC, the National Gallery of Art in Washington, D.C., and the Art Institute of Chicago. 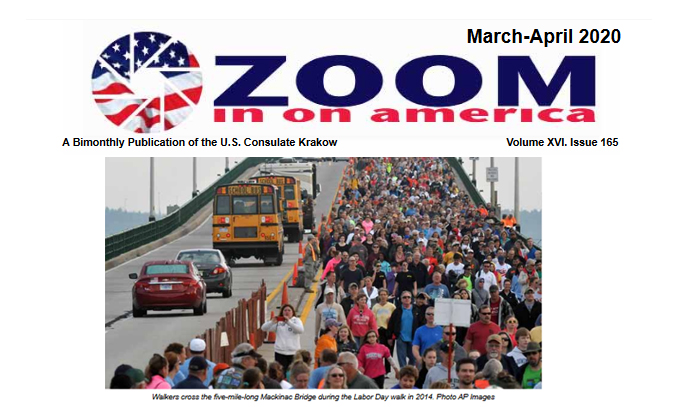 March-April 2020 issue of Zoom in on America

The issue features the state of Michigan, its history, symbols, cities and the Great Lakes. 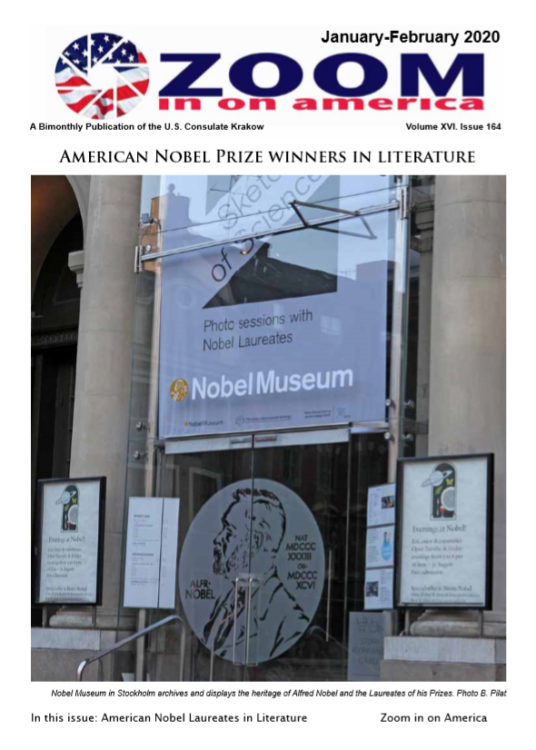 January-February 2020 issue of Zoom in on America 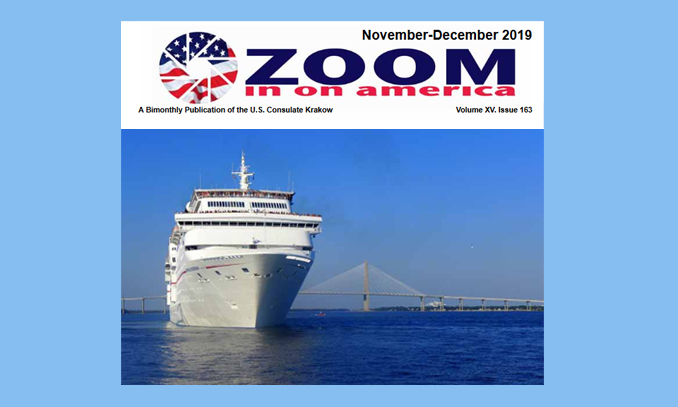 November-December 2019 issue of Zoom in on America

Charleston is the oldest and largest city in South Carolina and it is also one of the state’s main tourist attractions. The strong, flamboyant colors brought out and enhanced by the vibrant southern sun, match the deep blueness of the sky and water, creating a photogenic background to cobblestone streets, palm trees, and colorful facades of historic buildings. 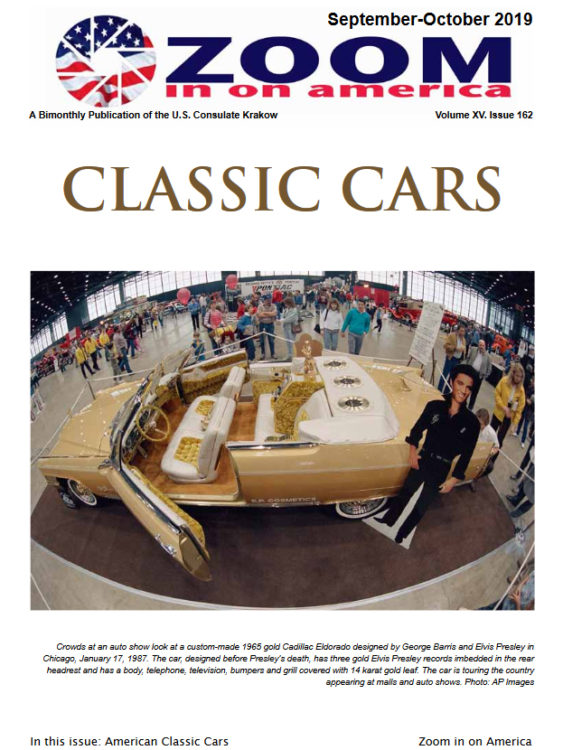 September-October 2019 issue of Zoom in on America

This issue is about American Classic Cars. Ingenious in design, big in dimensions, powerful and comfortable, the car has defined 20th century American pop-culture. The country’s huge size, long distances and good roads have made Americans reliant on cars.

Summer 2019 issue of Zoom in on America

The history and present-day of San Francisco’s landmark – the Palace of Fine Arts is the topic of this issue of Zoom in on.

Where are Voyager 1 and Voyager 2 now? What is the Golden Record? This issue concentrates on two American spacecraft that have been on their space missions for over 40 years.

February - March 2019 issue of Zoom in on America

This issue is about influential American Women of Letters. 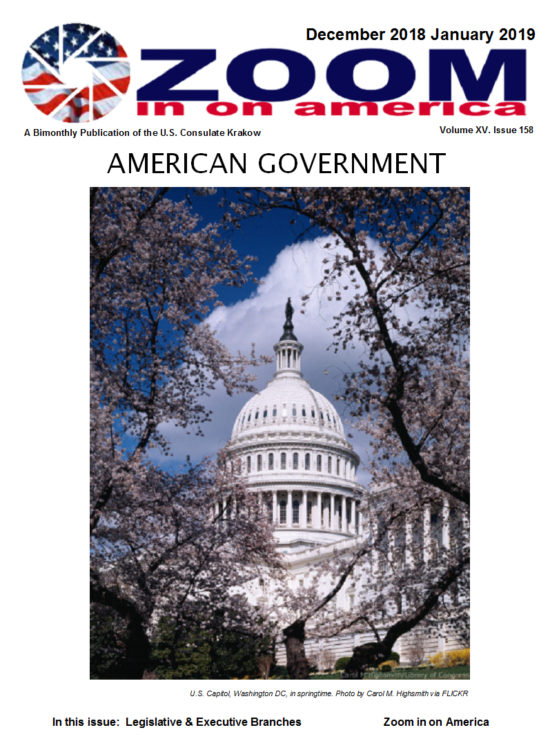 This issue of Zoom in on is about American institutions.

October-November 2018 issue of Zoom in on America

In an exclusive interview for Zoom in on America, Dr. Freeman advises young people how to go about starting a successful business.

Sharon T. Freeman, Ph.D., is an American entrepreneur who started her first company in Hong Kong. She has worked in over 120 countries for large corporations and leading institutions including the U.S. State Department, the World Bank, the IFC, UN organizations, the U.S. Agency for International Development, and others. She is President and CEO of Gems of Wisdom Consulting, Inc. As an entrepreneur and business owner, Dr. Freeman has provided consulting services to clients around the world to help them achieve their destined outcomes.

September 2018 issue of Zoom in on America

One World Trade Center is a new landmark adorning the characteristic skyline of New York’s Lower Manhattan. Its height, 1,776 feet, is a symbolic reference to the year the United States declared independence from the British Empire on July 4, 1776. Filling the void of the Twin Towers, it is also a symbol of the future and hope, and the unyielding spirit of America.

July-August 2018 issue of Zoom in on America

Before he became the 31st President of the United States, Herbert Hoover was a great humanitarian activist who helped the countries affected by World War I. Poland was one of such countries at that time and in desperate need of aid from outside sources such as those organized by Herbert Hoover. This issue of Zoom focuses on Herbert Hoover’s life and his humanitarian efforts. 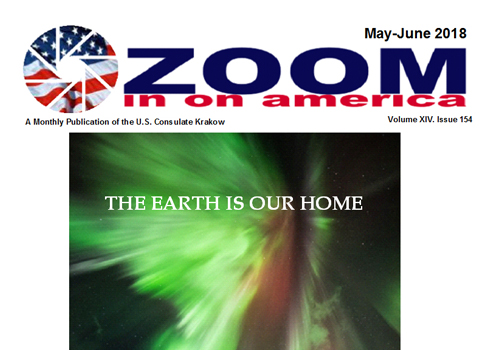 May-June 2018 issue of Zoom in on America

It no longer seems necessary to convince the majority of people that we all need to take care of our environment if we want to preserve our planet for future generations. Air and water pollution alongside other ailments, such as shrinking resources pose a threat to us all at the present time. An interdisciplinary effort is needed and support from governments is imperative to secure our future as the inhabitants of planet Earth. Young people have a big say in the effort to protect our environment. In this issue Zoom looks into some ways in which people want to help protect the environment. 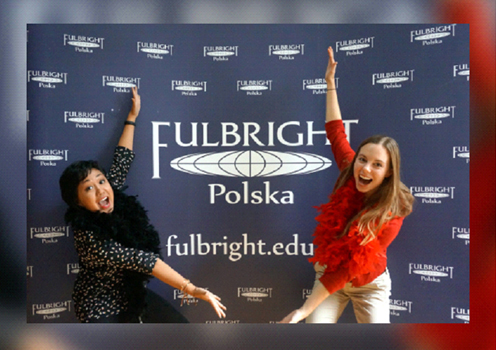 March-April 2018 issue of Zoom in on America

In this issue, Zoom focuses on Fulbright Program, a worldwide program that is operated on  bilateral basis. It’s an academic program aiming at graduate level students, doctoral candidates and scholars. What distinguishes Fulbright from many other grant programs, is its emphasis on intercultural exchange and learning. Being a Fulbright grantee encompasses being an  informal ambassador of one’s culture in the host country. 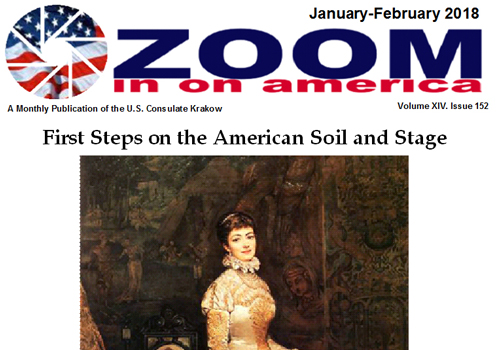 Helena Modrzejewska was an accomplished Polish actress when she moved to America in the late 19th century. In her Memoirs and Impressions, she describes her first steps on the American soil. This issue of Zoom looks into some of her memoirs including the moment when she changed her name Modrzejewska to Modjeska to make it easier to pronounce for English speakers.

In the coming months, U.S. Mission to Poland will be commemorating the centennials of Poland regaining independence (2018) and the establishment of U.S.- Polish diplomatic relations (2019).
This special issue of Zoom in on America features two people whose contribution to the emergence of the independent state of Poland after WWI was especially significant: President Woodrow Wilson and Ignacy Jan Paderewski.

If traveling West in today’s America – where every hill, mountain, creek and valley has been measured, photographed and inspected by scientists – can arouse admiration, let us imagine what it must have been like for the explorers 200 years ago,  when there were no maps, no towns or cities, and nothing disturbed the silence of the primeval landscape.

John Fitzgerald Kennedy was born in Brookline, Massachusetts, on May 29, 1917 as the second of nine children born into the family of Joseph Patrick Kennedy and Rose Fitzgerald Kennedy. Read more about the life and politics of John F. Kennedy in the summer issue of Zoom in on America.