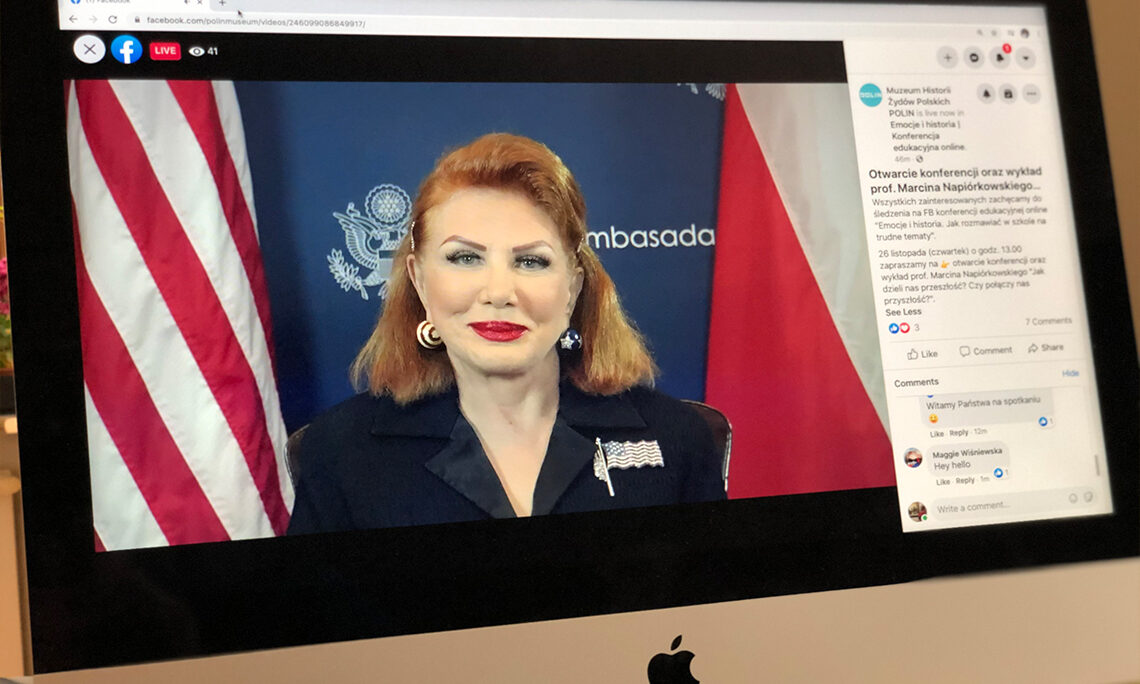 On November 26, 2020, over a thousand Polish educators attended the online international conference “Emotions and History:  How to Talk about Difficult Topics at School.”  The conference was organized by the POLIN Museum of the History of Polish Jews in Warsaw as part of its continuing efforts to support education about the Holocaust.  Experts from Poland, Norway, and the United States discussed different approaches to teach youth about the history of the harrowing lessons of the Holocaust and World War II.  The U.S. Embassy supported the conference through opening remarks delivered by Ambassador Georgette Mosbacher and by sponsoring two American expert speakers.  The American experts, Dr. Ilene and Michael Berson of the University of South Florida, shared their expertise on “Developing Young Children’s Identity and Empathy with Holocaust Testimony.”

In her opening remarks, Ambassador Mosbacher commended the educators attending the conference, highlighting that “Education is the foundation of understanding and acceptance – and it is the best antidote against stereotypes, racism, and bigotry against Jews and all minorities around the world.”  The Ambassador was joined at the opening of the conference by Polish and international officials.  They included Jarosław Sellin, Under Secretary of State of Poland’s Ministry of Culture and National Heritage; H.E. Anders Eide, the Ambassador of the Kingdom of Norway; Christian Wee, Director of the Falstad Centre; and Tomasz Kuncewicz, Director of The Auschwitz Jewish Center.

This was the fourth conference organized by POLIN with the support of the U.S. Embassy that focuses on supporting educators in Poland who teach about the Holocaust.  The Embassy and POLIN also annually collaborate in selecting and sending to America Polish educators who attend teacher training on the Holocaust.  To date, over 90 Polish teachers have already taken place in this valuable teacher exchange program.