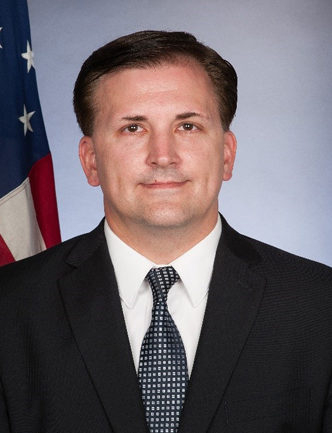 Patrick T. Slowinski is a career member of the U.S. Foreign Service.  He began his diplomatic career as a Vice-Consul at U.S. Embassy Warsaw.  Since that time, Patrick has had multiple assignments covering economic issues overseas.  Following Warsaw, Patrick served in Ukraine, Turkmenistan, Afghanistan, and most recently Russia.

Patrick recently served as the Deputy Economic Counselor at U.S. Embassy Moscow 2016-2018, where he led the Embassy’s Macroeconomic, Energy, and Socioeconomic Unit.

His most recent assignment in Washington D.C. was as the Poland Desk Officer in the Office for Central Europe in the State Department’s Bureau of European and Eurasian Affairs.  In that role Patrick covered both political and economic bilateral issues related to Poland.  He worked closely with the Polish Embassy in Washington D.C. to strengthen the U.S. bilateral relationship, while using the Polish language.

Patrick also had overseas assignments in Ukraine, Turkmenistan and Afghanistan 2009-2013, where he covered economic, energy, mining sector, and commercial issues.  During those postings, he often employed his Russian and Ukrainian language skills.

Patrick’s extensive energy experience resulted in an assignment at the Office of the United States Trade Representative Executive Office of the President of the United States of America, where he was Director for South and Central Asia and Iraq.  He also returned to the Department of State’s Bureau of Energy Resources to serve as Senior Eurasian Energy Officer, covering over twenty countries.

Before becoming a diplomat, Patrick worked as a university administrator, international student academic coordinator, and a linguistics and Student Development faculty member.  Patrick has also worked as both a theoretical and applied linguist.  He received a doctoral degree in education in 2002, and completed post doctoral work at Kansas State University.  Patrick is also continuing his education by pursuing a degree in Industrial and Occupational Psychology at the Harvard Extension School.

Patrick speaks fluent Polish, Russian, Ukrainian, and French.  He has four children and one grandchild.

Consulate hours of operation are: 8:30 a.m. - 5:00 p.m. Monday through Friday. Consulate is closed for the holidays.