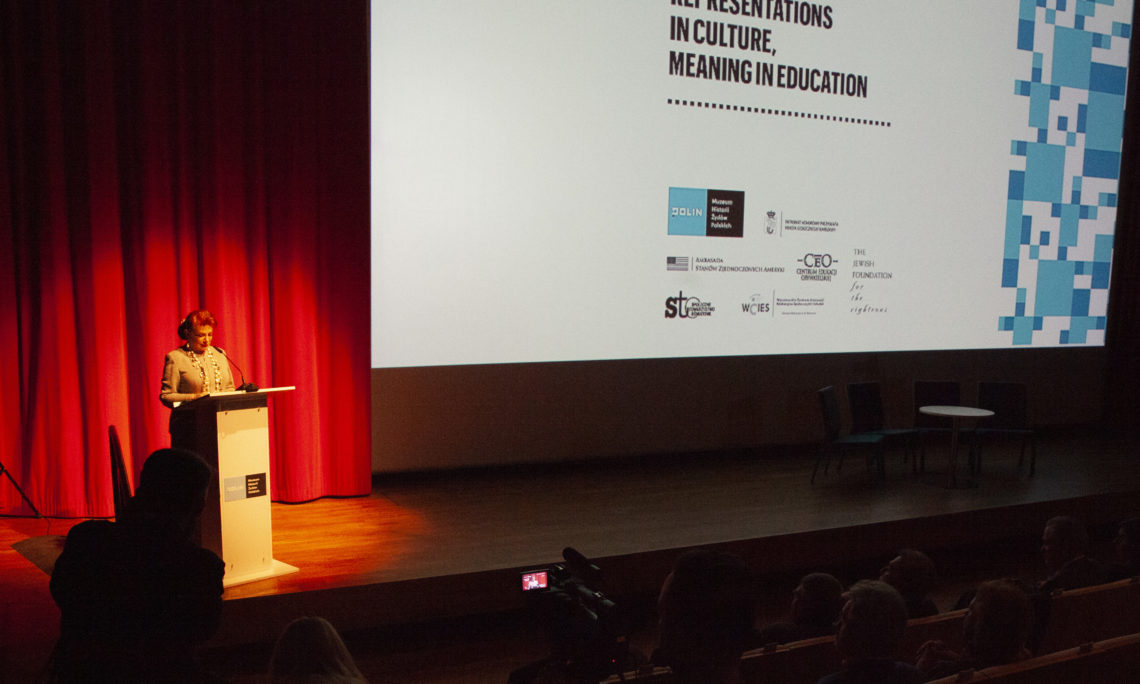 On October 25, Ambassador Mosbacher addressed 200 Polish teachers at the opening of the international conference “How to talk about Righteous?  Representations in Culture, Meaning in Education” organized by the POLIN Museum of the History of Polish Jews in Warsaw and co-sponsored by the U.S. Embassy in Poland.  In her opening remarks, Ambassador Mosbacher saluted the teachers participating in the conference, telling them that “You are the world-changers on the front lines; you are the people who educate future generations; and you are the ones who influence people’s attitudes when it comes to remembering, discussing, and studying the Holocaust.”  Officials attending the conference opening included the host, POLIN’s Deputy Director Zygmunt Kępiński; Secretary of State Jarosław Sellin of Poland’s Ministry of Culture and National Heritage; the Vice President of the City of Warsaw Włodzimierz Paszyński; the Ambassador of the State of Israel to Poland Anna Azari; and Stanlee Stahl, Executive Vice President of the New York-based Jewish Foundation for the Righteous.

Among the invited experts and guests taking part in the conference were Dr. Stephen D. Smith, UNESCO Chair on Genocide Education and Executive Director of the California-based USC Shoah Foundation, and Karen Jungblut, Director of Global Initiatives at the Shoah Foundation. Tom Yazdgerdi, visiting Special Envoy for Holocaust Issues of the U.S. Department of State, also attended the opening of the conference.

Co-sponsored by POLIN and the U.S. Embassy, the conference also benefited from the support of the Center for Citizenship Education, the Civic Educational Association, the Warsaw Centre for Socio-Educational Innovation and Training, and the New York-based Jewish Foundation for the Righteous.  This was the second consecutive conference in two years organized by POLIN with the support of the U.S. Embassy that focuses on supporting educators from all over Poland who teach about the Holocaust.  This cooperation also includes annual collaboration between POLIN and the U.S. Embassy in the selection and sending of Polish educators to attend teacher training on the Holocaust in the United States, with over 90 teachers already having taken part in the teaching exchange to date.  For more about the conference please visit: http://www.polin.pl/en/event/the-international-conference-how-to-talk-about-the-righteous