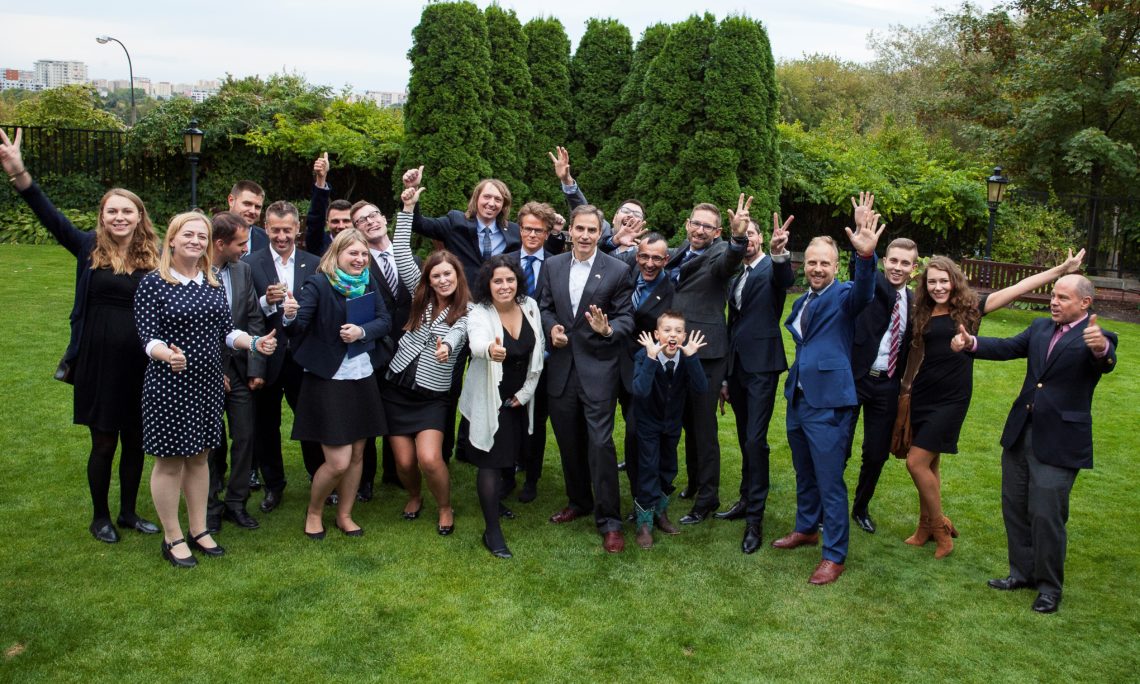 On September 22nd, Ambassador Paul W. Jones hosted American Fulbright Scholarship recipients who will spend the next academic year in various Polish cities, as well as Polish Fulbright Alumni who just returned from the from the United States.

This year, there will be more than 40 American students and professors living and working in Poland.  They will spend their time at universities in Warsaw, Cracow, Poznan, Wroclaw, Bialystok, Szczecin, Gdansk, Lodz, Bydgoszcz, Lublin, Rzeszow, Katowice, Koszalin, Czestochowa, and Gliwice.  They will be conducting research and scientific programs in the fields of Information Technology, Economy, Political Science, Art, Literature, and many other areas.  In the upcoming month, we will present their profiles on the Fulbright Commission website.

Fulbright is the most widely recognized and prestigious international exchange program in the world.  It was initiated by Senator J. William Fulbright in 1946.  It is designed to increase mutual understanding between the people of the United States and the people of other countries through academic exchange.  So far over 370,000 students and scientists participated in the program in over 160 countries.  In Poland, the Fulbright Program has offered scholarships since 1959 owing to joint financial effort of both countries: the USA and Poland. Since its conception, more than 4,000 Poles have participated in the program.

Why is it worth applying to the Fulbright Program?  Fulbright scholars are awarded scholarships from four to nine months long, which allow them to study or do research at American universities – the best in the world, renowned for their academic excellence, high quality facilities and resources.

Fulbright is a life-changing experience, both in professional and personal lives.  Fulbright scholars make contacts that last for many years, and their U.S. experience helps them progress in their careers.

In Poland, Fulbright scholarships are addressed to researchers and students who want to pursue master or doctoral studies in the USA.

You can find more information about scholarships and deadlines here: http://www.fulbright.edu.pl/pl/category/programy/dla-polakow/