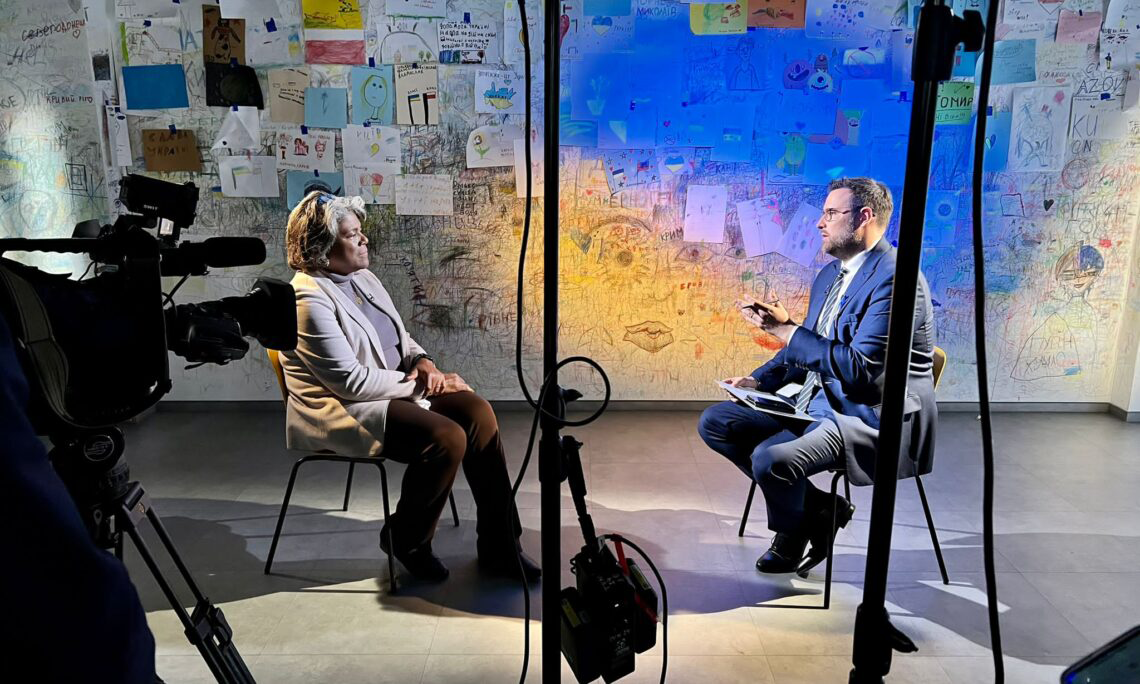 QUESTION: Madam Ambassador, thank you very much for joining us. Thank you for your time.

AMBASSADOR LINDA THOMAS-GREENFIELD: I am delighted to be here. Thank you for having me.

AMBASSADOR THOMAS-GREENFIELD: Well, first and foremost, you described it as a crisis, and it is a crisis when you look at the impact that this war has had on ordinary people in Ukraine. And so first in Ukraine, I had the opportunity to meet people who were living in centers that were being provided by UNHCR* because their houses have been damaged, they had no electricity, and they were forced to move from their homes to these centers.

But here in Poland, what is extraordinary is the hospitality, the open arms, the welcome that the Polish people have provided for Ukrainian refugees. So, I’ve come to express our strong gratitude to the Polish government and to the Polish people, but also to hear from refugees themselves what they are experiencing and the challenges they are facing.

QUESTION: And in fact, we are surrounded by drawings made by children refugees, and the question is: What can the adults do right now? Because the diplomatic effort seems to be extremely difficult to coordinate. Are you satisfied with the international community’s response to the Russian invasion of Ukraine?

AMBASSADOR THOMAS-GREENFIELD: I think the international community has strongly responded to the invasion. We’ve been unified in our condemnation of the Russian unprovoked attack on Ukraine. We’ve isolated Russia in the Security Council. We’ve brought together the international community with 141 votes in the General Assembly to condemn Russia, 143 to condemn their attempted annexation of territory they’ve tried to take from Ukraine. So, I think we’ve been strong.

But you asked me what I was saying to the parents, and I just said it to parents: They have to stay strong. They have to stay strong for their children. These children – we see these beautiful drawings that they have on the walls here – they are being traumatized by this situation, and they need their parents to stay strong until the diplomatic efforts are successful to – until Ukraine defeats the Russians and force Russia off of its territory.

QUESTION:  Arguably, one of the things that allows you to be strong is not only receiving help, but also knowing that the culprits will be punished. And sometimes I hear from our viewers, for example, they ask, “How is it possible that a country led by a dictator, by a war criminal, by a butcher, is still a member of the Security Council of the United Nations?”

AMBASSADOR THOMAS-GREENFIELD: I’m asked that question every day, and I think it is an appropriate question to ask. Unfortunately, Russia is a permanent member of the Security Council; but we have been successful in isolating them, we’ve been successful in condemning them, and we will keep the pressure on them until they leave Ukraine’s territory.

QUESTION: You have been to Kyiv yesterday. You have spoken to President Zelenskyy. We have read that, for example, he has spoken about the significance of the Black Sea Grain Initiative and generally in countering what Russia has been doing with the food shipments. And that is an astonishing crisis of international significance. How can those food transportations be secured?

AMBASSADOR THOMAS-GREENFIELD: Well, this Black Sea Grain Initiative is an important initiative that is allowing for Ukrainian grain to get to the international markets, to get to the mouths of people who are experiencing famine all over the world. We have seen these ships arrive on the Horn of Africa. We have seen ships arrive in Yemen and in other places where this food is needed. So, this grain deal is truly important.

Russia’s attempt to blackmail the international community, to intimidate the international community a few weeks ago, was really unconscionable. But they did come back, and so I know the Secretary-General is working very, very assiduously to get an extension of this deal which is due to expire on November 19th. And we are very, very supportive of these efforts because we know how important getting grain through the Black Sea is for the world.

QUESTION:  In your answer, you spoke of something that I’ve thought a lot about, and you used the word “blackmail” regarding what Putin is doing to the world in terms of the food shipments, so please allow me to circle back to punishing him. Do you think that – you’ve answered in a very interesting way the question about Russia’s presence in the Security Council, but what about punishing Vladimir Putin personally, the person who is the mastermind of this horror? Do you see the international community ready to do something to punish him?

AMBASSADOR THOMAS-GREENFIELD: Well, right now, we – in fact, during my visit to Ukraine, I visited with a forensic facility that is gathering data to support prosecutions of those who have committed crimes against humanity, those who have committed atrocities. I won’t go so far as to say when those prosecutions will come forward, but I know that we’re working with the Ukrainian prosecutor’s office to gather that data.

QUESTION: Do you – as an experienced diplomat, so many years in the Foreign Service of the United States – do you believe, given your – or do you assess that it is possible that he might face personally punishment for being the mastermind?

AMBASSADOR THOMAS-GREENFIELD: I don’t want to predict what will happen, but I know that he is responsible for what is happening in Ukraine right now, and we will hold Russia accountable.

QUESTION: I don’t mean to ask you now about internal American politics, but there has been a big election, and we don’t even know the final results yet. Do you predict that the American approach, the American policy of helping Ukraine in such a significant way, will be upheld?

QUESTION: Do you ever get asked, for example, “Why are you spending so much money over there when we need it here?”

AMBASSADOR THOMAS-GREENFIELD: Well, because Ukraine is fighting a war that is in all of our interests. Russia’s attack on Ukraine – if Ukraine is not able to defend themselves, they will be attacking another country. Ukraine is defending democracy, and democracy and our values are important. And so we have to support Ukraine because this could happen elsewhere in the world.

QUESTION: My last question, Madam: How do you see this conflict ending and under what conditions, in what way, in what timeframe?

AMBASSADOR THOMAS-GREENFIELD: This conflict could end tomorrow. It could end tomorrow if Russia pulls their troops out of Ukraine. If Russia ends this aggression against Ukraine, it would be over. And that’s what we’re all working for.

QUESTION: You hope that happens as soon as possible?

AMBASSADOR THOMAS-GREENFIELD: We do.

QUESTION: Thank you very much, Madam Ambassador, for your time and speaking with us today.