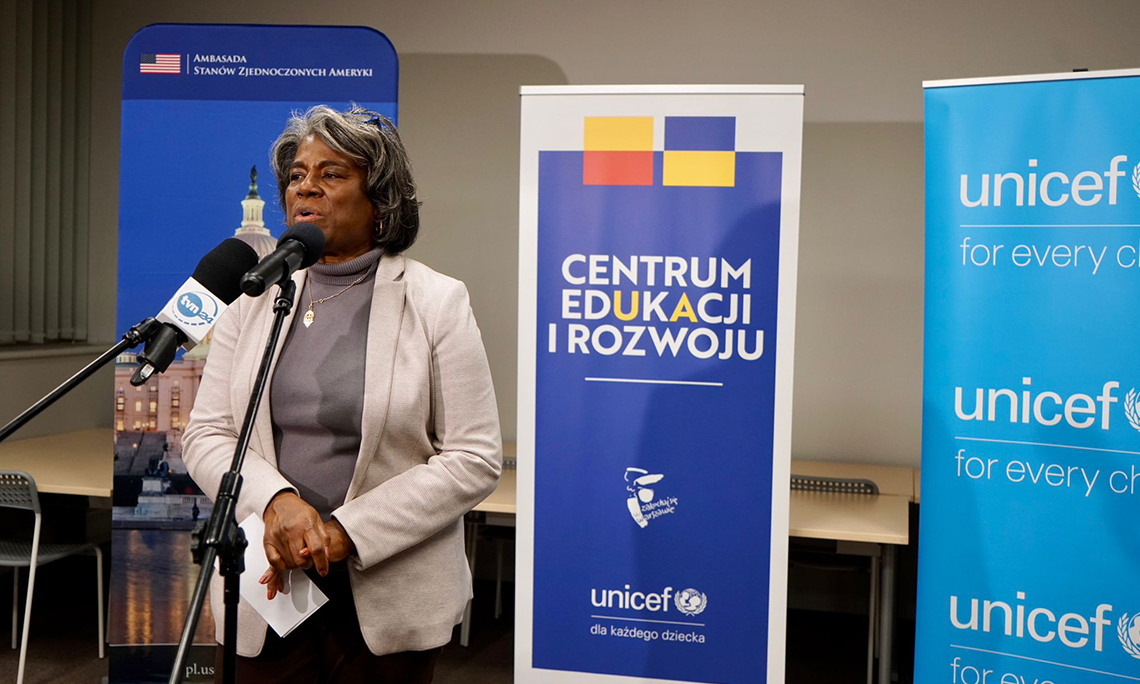 Remarks by Ambassador Linda Thomas-Greenfield at a UNICEF Education Hub in Warsaw, Poland

AMBASSADOR LINDA THOMAS-GREENFIELD: (In progress) … gratitude firstly to the people of Poland and the Government of Poland for their hospitality and their welcoming to Ukrainian refugees. I’ve spent the past two days, first in Ukraine and now here, where I’ve heard stories of the impact that this war has had on so many people – people still in Ukraine but even people here in Poland.

And I’ve just spent the past couple of hours meeting with individuals and organizations who are supporting Ukrainians here in Poland. Particularly want to commend UNICEF for the work that they are doing here in the center, work that has been funded by the U.S. government through the Office of Population, Refugees, and Migration. And I will tell you what I have heard from refugees here every single time I’ve met with them is that they want to go home. I met with young children who told me they want to go back to school. And you can see at this center the real community that they have formed here, but it is a Ukrainian community all with the same idea in mind that they want to go home.

I think I’ll stop there because I’ll take a couple questions and then we’ll call it a day.

MODERATOR: Sure. Right there. Thank you.

QUESTION: Hello, hi. Thank you, Ambassador. I’m Vanessa Gera with the Associated Press. As winter comes and Russia continues to attack the power installations of infrastructure in Ukraine, there are concerns that there could be another large wave of refugees coming to Poland and other countries of Europe. Is the U.S. doing anything to prepare for this? Is the U.S. prepared to take more refugees? Is the government doing more to help Poland and some of these frontline states here?

AMBASSADOR THOMAS-GREENFIELD: Well, certainly. First, when I was in Ukraine yesterday, one of the areas that I focused on was winterization and how to support efforts to provide assistance to those Ukrainians who have been forced from their homes because of Russia’s horrible attacks on the infrastructure, the electricity system, the water system. And I saw people who were living in community centers who could not return to their homes. So, we announced yesterday 25 million additional U.S. dollars from USAID to support winterization programs inside of Ukraine as well as outside of Ukraine.

And certainly, we’re working, and part of my meetings here in Poland was to talk with the agencies, to talk with the Government of Poland about contingency plans for the possibility that people may start coming across the border because of conditions inside of Ukraine.

QUESTION: I was just wondering what your thoughts are on the impact of the midterm elections on U.S. foreign policy as well as the chances of Russia-Ukraine peace talks.

AMBASSADOR THOMAS-GREENFIELD: I haven’t given that any thought other than the fact that our support for Ukraine has been bipartisan. So, I don’t see that elections will have an impact on that support. That’s a domestic issue. Our foreign policy, again, has been bipartisan, and I know that the President will continue to work with Congress to get the support that Ukraine needs until Russia’s unprovoked attacks on Ukraine are brought to an end.

MODERATOR: Great. All right. Thank you, everyone, and I know the deputy mayor is here too who will speak. Thank you.

AMBASSADOR THOMAS-GREENFIELD: Thank you very much, and I really want to, in front of the cameras, thank the deputy mayor for what they are doing here to support Ukrainians and to support this center.