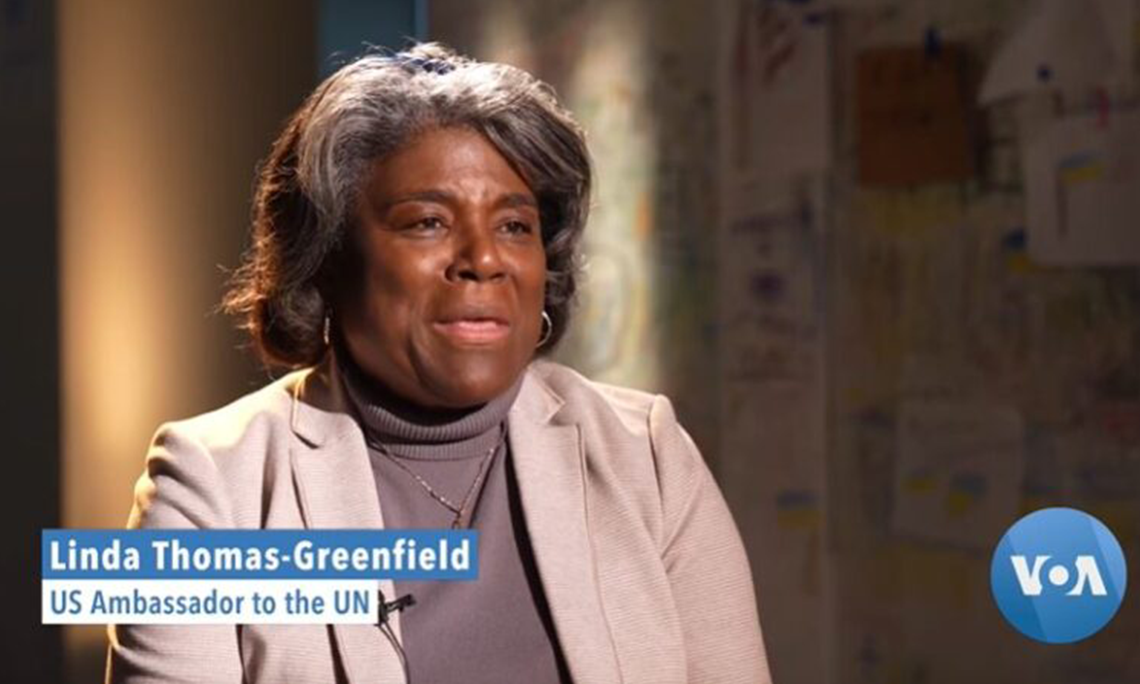 AMBASSADOR LINDA THOMAS-GREENFIELD: I felt it was really important for me to go to Ukraine because it is on our agenda, almost on a weekly basis, in the Security Council. And I wanted to be able to speak from experience. And I can only say it was an eye-opening experience for me to, one, see the strength and the courage of the Ukrainians, from the president on down to the little children that I met, but also to see the devastation that this war is having on Ukraine and the people of Ukraine. And I left there absolutely more committed to doing everything possible to end this war.

AMBASSADOR THOMAS-GREENFIELD: Well, certainly I see Ukraine in the driver’s seat, and having President Zelenskyy lay out his conditions, I think, sets a very strong platform for any discussions that might go forward on peace. But truthfully, this ends tomorrow if Russia pulls its troops out of Ukraine, and there won’t be any need for talks. Kids can go back to school. Ukrainians can start to rebuild their lives. They can start to return home. This is in Putin’s hands, and we need to keep the pressure on President Putin.

QUESTION: That’s true, but unfortunately President Putin is not – doesn’t look like he’s planning to stop. What are the challenges and the worst-case scenario you can see in this crisis, this war?

AMBASSADOR THOMAS-GREENFIELD: Well, currently the biggest crisis is winter, and I was there to look at the winterization program. Russia is attacking Ukraine’s infrastructure. They are attacking their energy and electricity grid. They’re attacking water systems. And that will make it very, very hard for people to get through what is predicted to be a very cold winter. So I did go with the idea of talking to the humanitarian agencies about their contingency plans for addressing the winter moving forward, and I’ve had those discussions here as well.

QUESTION: The United States showed leadership in coordinating and organizing the international community in support of Ukraine. However, some countries are not on board in supporting Ukraine. And how do you – what kind of challenges do you see in this regard, specifically before the G20 Summit that is coming up?

AMBASSADOR THOMAS-GREENFIELD: I think the biggest challenge is to really communicate that this is not a war between Russia and the United States. It’s not between East and West. This is an attack on the UN Charter. It is an attack on the sovereignty of Ukraine, an independent country – on the integrity of their borders. And that is the message that we want to get across as we go into the G20. It is a message that we work every day to get across at the United Nations. And I think we have had great success. I mean, getting 143 countries to condemn Russia’s attempted annexation of Ukrainian territory I think was a major achievement, and we will keep working to build this coalition of countries who are prepared to very publicly condemn Russia’s actions.

AMBASSADOR THOMAS-GREENFIELD: They have challenged the Charter. They’ve challenged everything that we believe in. We do not think that the kinds of actions that Russia is taking in Ukraine are worthy of a country that is a permanent member of the Security Council. That said, they are a permanent member. So what we’re working to do in the Council and in the UN is to isolate them – to condemn them, to isolate them, to kick them off of those entities where we’re able to kick them off. We were able to suspend them from the Human Rights Council, worked to suspend them and kick them off of other UN bodies, and we will continue to condemn them in the Security Council.

QUESTION: Do you see the path of kicking them out from the Security Council?

AMBASSADOR THOMAS-GREENFIELD: I don’t see that path, but I don’t think that we should give up on that possibility if presented the opportunity.

QUESTION: Thank you so much.