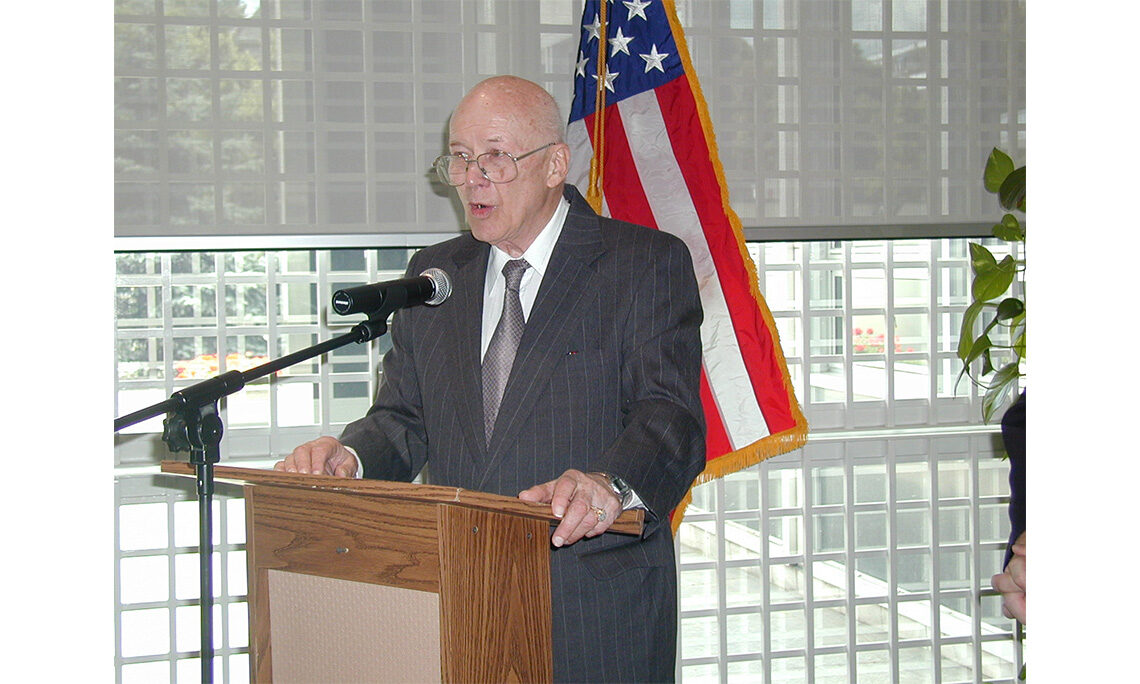 Chargé d’Affaires, a.i. B. Bix Aliu recounts a story by Ambassador Brzezinski about the remarkable life and legacy of Jan Nowak-Jeziorański, who passed away seventeen years ago today.

Chargé d’Affaires, a.i. B. Bix Aliu:  It is fitting that Ambassador Brzezinski begins his journey from the U.S. to Poland today.  His journey coincides with the anniversary of the death of Jan Nowak-Jeziorański, “Courier from Warsaw,” and I remember an incredibly touching story he shared with me, regarding the significant role Jan Nowak-Jeziorański played in his life.  I want to share it with you now.

Ambassador Mark Brzezinski:  I had the tremendous good fortune to call Jan Nowak almost an adopted father.  He moved to the Washington DC area when my father was serving as National Security Advisor to President Carter.  While my late father was deeply engaged with all his children, when he served in the White House he had less time to do the “fun stuff.”  That’s where Jan Nowak stepped in.  I remember long road trips with Jan Nowak to the Blue Ridge mountains and the long conversations he engaged me in about school, sports, life, about Poland, his own personal story.  He was incredibly generous with his time, despite the intense professional demands leading the Polish Service of Radio Free Europe.  He had a positive, optimistic outlook on life that was infectious and that got him through the darkest, coldest of times.  One story he told me about serving as Courier during World War II sticks in my memory:  When carrying messages to the West from Nazi occupied Poland, in the middle of the cold Polish winter, he smuggled himself out of the country by burying himself in the coal cargo on a train chugging West.  Because Nazi soldiers were on the cargo train, and because the train was routinely searched, he remained buried under cold coal rock for days, practically dieing from the frigid temperatures and literally emerging frozen when the train arrived in the West.  When I asked him how on earth he survived, he said he knew his mission was important, and that this was for the preservation of his homeland, and that was all it took to motivate him.  I never forgot that.

I was fortunate to have been invited by him when he was awarded at the White House the Presidential Medal of Freedom by President Clinton, standing alongside American giant icons like Rosa Parks and Sam Walton.  I could not be more proud to have been there.  But what struck me that day more than anything, more than meeting President Clinton and watching the Medal ceremony, was this:  Jan Nowak said he could not stay at the White House reception following the medal ceremony to hobnob with the celebrities and senators and VIP’s who were there.  Jan Nowak had to immediately return to his little cul-de-sac in Annandale, Virginia.  Why?  Because the children in his neighborhood had decided to hold a party celebrating Jan Nowak and his Medal.  Jan Nowak did not want to be late for them.  And off he went…  Jan Nowak died without children, and I have heard people comment that he would have been a great father.  Actually this giant of a man had children, a whole neighborhood of them, and he did not forget them on his biggest day.

I am incredibly honored to have known this giant of a man, to have learned from him.  The Courier from Warsaw will be a very important North Star for me as I undertake my mission for President Biden in Warsaw.