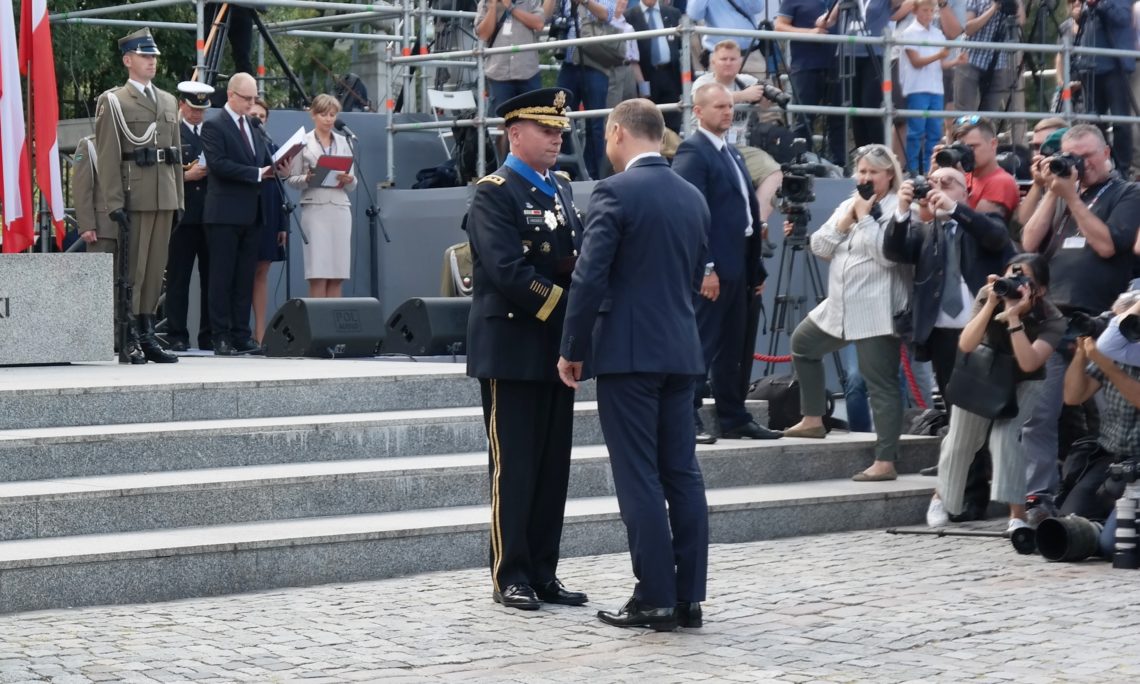 On August 15, U.S. Army Europe Commanding General LTG Ben Hodges was awarded with the Commander’s Cross from President of Poland Andrzej Duda “for his commitment to the development of Polish-US military cooperation, the strengthening of the NATO eastern flank and increasing the U.S. presence in Poland.” During the ceremony, President Duda said: “Thank you, Sir, for your support in the implementation of Warsaw summit agreements, for the presence of U.S. Army in our country, for constructing and developing the allied security system. We, as Poles, are very grateful. Thank you for accepting our high honor awarded to friends of Poland. General, Sir, thank you!”

LTG Hodges also participated in the Polish Armed Forces Day military parade, along with U.S. Ambassador Paul W. Jones and U.S. soldiers. During his two-day visit to Poland, LTG Hodges met with Polish Armed Forces General Command head Major General Jaroslaw Mika and Operations Command head Major General Slawomir Wojciechowski. Additionally, he spent a day on a Battle Staff Ride of the Warsaw Uprising to gain an in-depth understanding of the heroism and tragedy of this significant WWII battle. He paid honor to Uprising heroes and victims by laying wreaths at the Warsaw Uprising Monument, Krasinski Square, and the Warsaw Uprising Ashes Monument, Wola District.  President Duda invited LTG Hodges to provide remarks at his Armed Forces Day reception. LTG Hodges thanked the President and the people of Poland, and poignantly concluded his remarks by linking the spirit of the mottos of US Army Europe and Poland; LTG Hodges said simply and emphatically: “ARMY STRONG – STRONG EUROPE!” And, “FOR YOUR FREEDOM AND OURS!