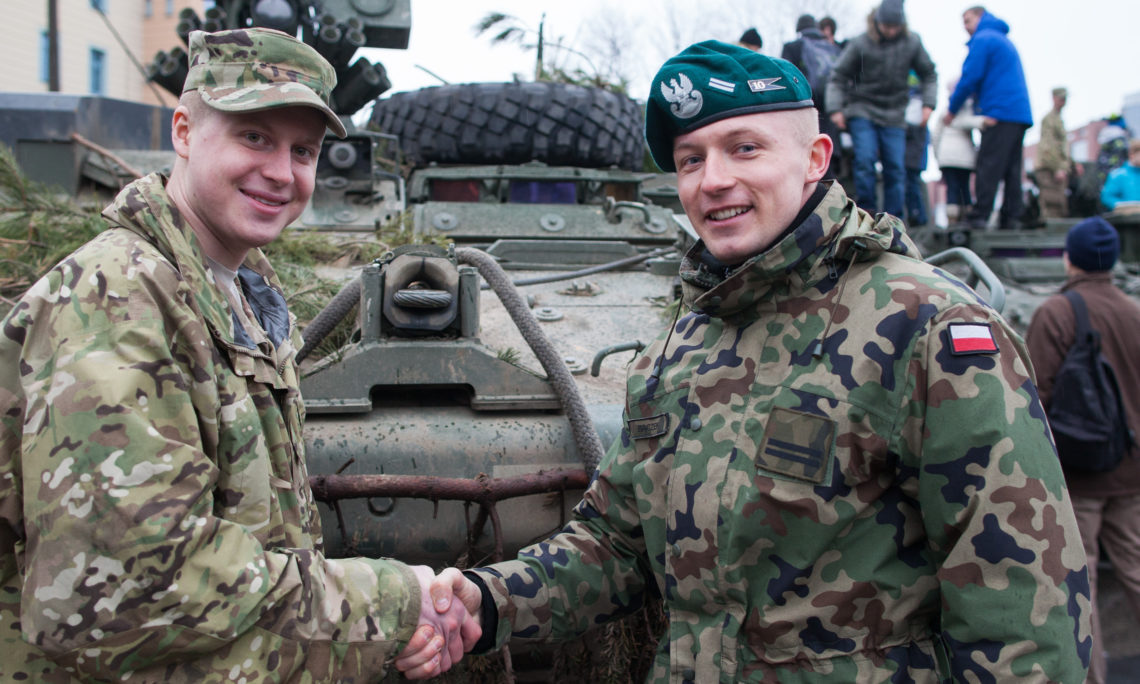 On Friday , March 11, 2016, at 1:00 PM, American Army troops from the 2nd Cavalry Regiment met with residents of Opole at Copernicus Square in front of Opole University.  Opole residents were able to talk with American soldiers and see American military equipment up close, including 10 Strykers and a Humvee.  Polish soldiers from the 10th Logistics Brigade of the Polish Land Forces in Opole also took part in the event and presented their equipment.

These K Troop, 3rd Squadron, 2nd Cavalry Regiment troops are currently exercising with the Polish Army at the military base in Nowa Dęba.  Earlier they exercised in Drawsko Pomorskie from where they started “Operation Knightrider” on February 22 when around 30 U.S. Army vehicles departed in three columns to drive across Poland.  On March 10 they  left the military grounds in Nowa Dęba, will overnight in Tarnowskie Góry, and on Friday morning the U.S. Army vehicles  headed towards Wędrzyn in Lubuskie Province to continue military exercises.  During the movement, they stoped in Opole to meet with city residents on March 11.  In total, the soldiers would traverse over 1300 kilometers across Poland.

The goal of “Operation Knightrider” is to demonstrate NATO forces’ freedom of movement along NATO interior lines, as well as the U.S. commitment to NATO security.  This exercise is part of Operation Atlantic Resolve launched in April 2014 as a demonstration of continued U.S. commitment to the collective security of NATO and to enduring peace and stability in the region, in light of Russia’s illegal actions in Ukraine.

Similar community events with American troops were organized in Poland several times over the past year.  Pictures from those events can be found here:  Białystok, Drawsko Pomorskie, Sandomierz, Rzeszów, Toruń and Łódź.