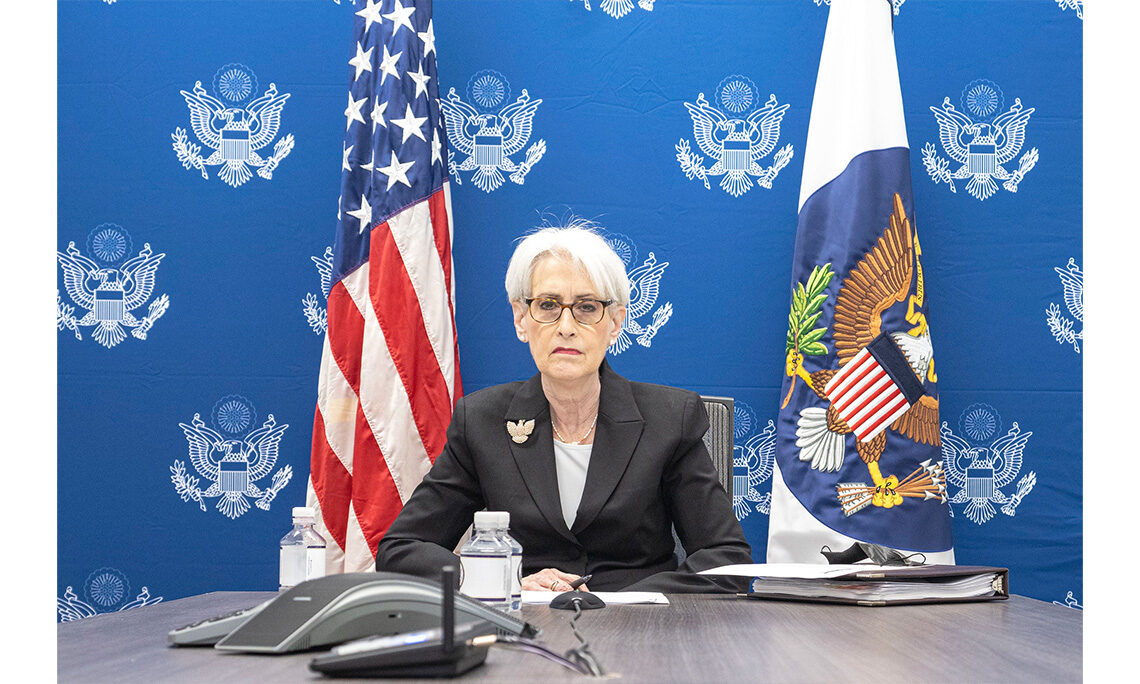 As delivered by Deputy Secretary of State Wendy R. Sherman
to the Inaugural Meeting of the Renewed OSCE European Security Dialogue, Vienna
February 8, 2022

Thank you, Minister Rau, for convening today’s meeting.  The United States is grateful to Poland for your leadership and vision as OSCE Chair-in-Office at this critical moment for European security— and for European cooperation.

We warmly welcome today’s launch of the Renewed OSCE European Security Dialogue.  And the United States fully supports the Chair-in-Office’s proposal to consider three clusters of issues in this dialogue: Confidence-building and security building measures; conflict prevention, management, and resolution; and non-military aspects of security.

The OSCE is a critical forum for these discussions.  Here at the OSCE, 57 nations stand on equal footing.  We recognize that comprehensive security includes not only military security, but economic and environmental security, and human security as well. And we have all agreed to the same principles—in the Helsinki Final Act, the Paris Charter, and in other documents—to advance our common security.

These principles must be our touchstone.  They include respect for sovereignty and territorial integrity.  That sovereign nations are free to choose their own paths, their own foreign policy orientations, and their own alliances without being threatened by force, or coercion, or subversion by other actors.  That the frontiers of all European states cannot and will not be violated.  That we will refrain from the threat or use of force against each other and will settle disputes peacefully.

These principles are all enshrined in the Helsinki Final Act and in other OSCE documents.  They are not up for debate, dispute, or negotiation. They are commitments that we have all freely made to each other—and to the wider world.  The United States stands by all of these commitments, as well as our obligations under the UN Charter.

Mr. Chair, as we meet today, Russia has amassed more than 100,000 troops in an unprecedented and unprovoked build-up on Ukraine’s borders.  It is the largest mobilization of troops Europe has seen in decades.  Moscow is using inflammatory rhetoric—and spreading disinformation and propaganda—in an attempt to paint Ukraine, the United States, and NATO, and the OSCE, as the aggressors, and not Russia.

There is simply no defensive justification for Russia to amass so many forces, in such a short time, on Ukraine’s borders. None. Ukraine poses no threat to Russia. Nor does NATO. Nor, for that matter, does the United States.

The United States and our allies and partners have offered Russia a diplomatic path out of this crisis. Only through diplomacy and de-escalation can we achieve real, lasting, and reciprocal improvements in our mutual security.  We continue to urge Russia to de-escalate tensions and to choose diplomacy instead of conflict.

I want to briefly offer the United States’ views on each of the three clusters of issues proposed for discussion by the Chair-in-Office.

First, on strengthening confidence and security-building measures.  The United States believes the OSCE is a critical forum for discussing concerns about conventional military forces and proposals to enhance military transparency, deconfliction, and confidence-building.  We welcome discussion of options to improve transparency around military exercises and see opportunities for risk reduction around military maneuvers.  We have already suggested some potential ways forward in the context of modernizing the Vienna Document, and look forward to continuing that process.

Second, on conflict prevention, management, and resolution.  Simply put, the best way to prevent and resolve conflicts is by staying true to our foundational principles and the commitments we have made to each other.  When countries act in ways that violate those principles and commitments—such as infringing on another country’s sovereignty and territorial integrity, or by trying to pressure and coerce another country into acting against its own interests, or by committing human rights abuses— it undermines the security of every nation represented here, and it undermines the international system that upholds peace and security around the world.

Third, on the non-military aspects of comprehensive security.  As I noted, the OSCE’s founding documents recognize that true security is not confined to the military realm.  In the Astana Summit Declaration, OSCE members reiterated, “our commitment to the concept, initiated in the Final Act, of comprehensive, cooperative, equal and indivisible security, which relates the maintenance of peace to the respect for human rights and fundamental freedoms, and links economic and environmental cooperation with peaceful interstate relations.”

If the Russian Federation believes—as we do—that it has an inherent right to sovereignty and security, those very same rights must exist equally for Moldova, for Georgia, and for Ukraine.  This is not the first time Russia has taken actions that are inconsistent with their OSCE commitments.  It was Russia that invaded Ukraine in 2014 and occupies Crimea to this day.  It was Russia that invaded Georgia in 2008 and continues to illegally occupy 20 percent of Georgian territory.  It is Russia that maintains a military presence in Moldova against the wishes of the Moldovan government, and in contradiction of its OSCE commitments.

These actions harm the security of Ukraine, the security of Georgia, and the security of Moldova.  They violate international law.  They threaten the cherished vision of a Europe that is free, whole, and at peace.  If Russia can invade other countries with impunity, that undermines the very concept of indivisibility of security that Russia is now invoking.  The simple fact is that the only durable path to building shared security runs through diplomacy and dialogue, not confrontation and conflict.

Here at the OSCE, we have the opportunity to walk that path of diplomacy together.  The United States looks forward to engaging with all of you, and to working together to achieve concrete, practical results that enhance everyone’s mutual security.

Again, I extend my sincere thanks to the Chair in Office for launching the Renewed OSCE European Security Dialogue.  Minister Rau, I assure you that the United States will do everything we can to make this dialogue a success.