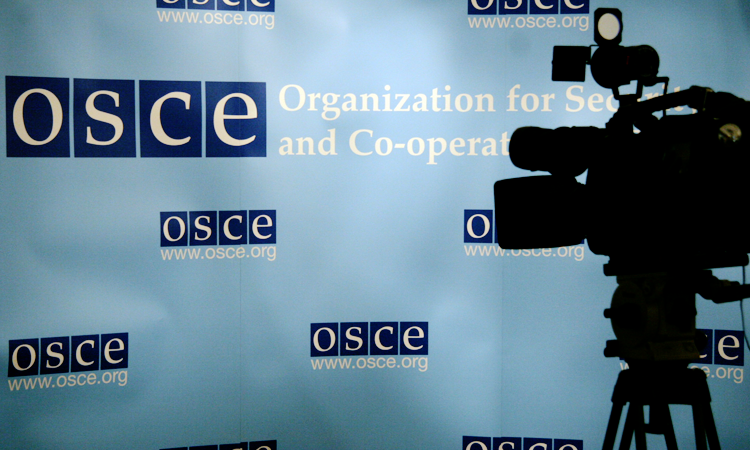 A TV camera positioned in front of a backdrop with OSCE logos prior to a news conference at the Hofburg in Vienna. (OSCE, Mikhail Evstafiev)

As delivered to the Permanent Council by Ambassador Eberhard Pohl, Head of the German Permanent Mission to the OSCE
Vienna, November 1, 2018

I am pleased to make this statement on behalf of the informal Group of Friends for the Safety of Journalists, composed of the following participating States: Austria, Canada, Denmark, Estonia, Finland, France, Germany, Greece, Latvia, Lithuania, Montenegro, the Netherlands, Norway, Sweden, the United Kingdom, and the United States.

Free and independent journalism is fundamental to the functioning of every democracy. Journalists keep citizens informed, encourage public debate, promote transparency, and hold public officials and institutions to account. They expose human rights violations, corruption, and other abuses of power. In the OSCE’s 2010 Astana Commemorative Declaration, participating States affirmed that free media plays an important role in helping ensure full respect for human rights, fundamental freedoms, democracy, including free and fair elections, and the rule of law. Freedom of the media lies at the core of the OSCE’s human dimension, thus forming part of the OSCE’s concept of comprehensive security, and is a matter of concern to all participating States.

In marking the International Day to End Impunity for Crimes against Journalists on November 2, we pay tribute to journalists and other media actors who have been targets of violence and arbitrary detention or of politically motivated prosecutions or even killed for their journalistic work. We also commend civil society organizations, human rights defenders and journalist networks for exposing and highlighting these acts and for their advocacy for a free and pluralistic media.

According to the Committee to Protect Journalists, over the past five years almost 300 journalists around the globe have been killed in relation to their reporting. In addition, the exercise of their work often puts them at risks of intimidation, torture, arbitrary arrest, detention, legal and physical harassment, and enforced disappearance. All those acts demonstrate an unacceptable disrespect for the right to freedom of expression and free and pluralistic media. Only one out of ten murders of journalists is ever solved. In some cases those who carried out the killings have been held accountable, but those who ordered them remain free.

We shall support persons and organisations raising awareness and helping uncover crimes against journalists. We must not forget the lives indelibly affected by these crimes. We owe it to the victims and their families to ensure that their cases will not be forgotten.

Impunity is a passport for more violence and attacks. It is a battle that must be fought every day, everywhere.
We are alarmed that public authorities, including political leaders, often fail to condemn violent attacks on journalists and other media actors. Those who would undermine a free press with threats or acts of violence must be held to account.

What is deeply worrying is that journalists’ killings are often harbinger of worse to come. Attacks against journalists and the media are often warning signs of worsening human rights conditions. Restricting the free media and threatening or imprisoning journalists generally signal instability and increasing tension, which are often followed by increasingly invasive and harsher government behaviour and overall risks to security. The OSCE, with its comprehensive approach to security, has an important role to play in countering such developments.

We highly value the role of the Representative on Freedom of the Media and welcome his dedication to the fight against impunity. The RFOM’s role in providing early warning and rapid response to attacks on journalists is needed more than ever.

As it has been 14 years since the OSCE participating States have adopted a commitment in the area of media freedom, we thank the Italian Chairmanship for tabling a draft Ministerial Council decision on the safety of journalists. We stand ready to engage with all delegations in a common effort to strengthen the safety of journalists and other media actors throughout the OSCE region and reach consensus on this important issue in Milan.

A free and safe environment for journalists undoubtedly strengthens the respect for human rights, democracy and the rule of law, as well as peace and development worldwide. We, the OSCE participating States, can and should make an important contribution.