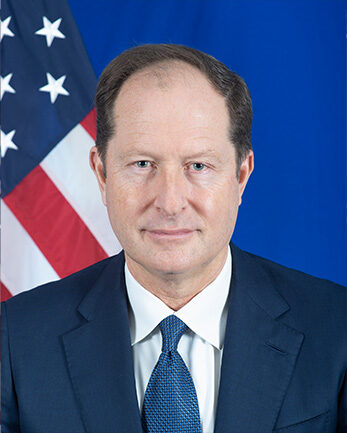 Mark Brzezinski was sworn in as the Ambassador of the United States to Poland on December 22, 2021.

Ambassador Brzezinski previously served as U.S. Ambassador to Sweden from 2011 to 2015, spearheading innovative new approaches to advance U.S.-European trade and landing key Swedish investments, including Volvo’s decision to build a $1 billion factory in South Carolina. He also arranged the first-ever U.S. Presidential visit to Stockholm, which brought together all five heads of governments of the Nordic countries for a summit that galvanized a U.S.-Nordic strategic approach on energy, innovation, and sustainability. In 2015, he was asked by the White House to lead a strategic effort on the Arctic as the first Executive Director of the White House’s Arctic Executive Steering Committee.

Most recently, Ambassador Brzezinski was founder and principal of Brzezinski Strategies LLC. He was a Managing Director at Makena Capital Management, where he led the firm’s sustainable and ESG investing efforts. For a decade, he was a partner at the law firm McGuireWoods LLP, where he helped build the law firm’s international compliance practice. From 1999 to 2001, he served on President Clinton’s National Security Council staff, first as a Director for Russia and Eurasia, and then as a Director for the Balkans.

Ambassador Brzezinski is a member of the Council on Foreign Relations (CFR) and the Trilateral Commission. He was a Fulbright Scholar in Poland in 1991-93, during which he researched and wrote a book entitled “The Struggle for Constitutionalism in Poland.” In 2010, he was named to the State Department’s Fulbright Foreign Scholarship Board. He received a BA from Dartmouth College, a JD from the University of Virginia, and a PhD in Political Science from Oxford University.

He is the proud father of a teenage daughter, Aurora Brzezinski.