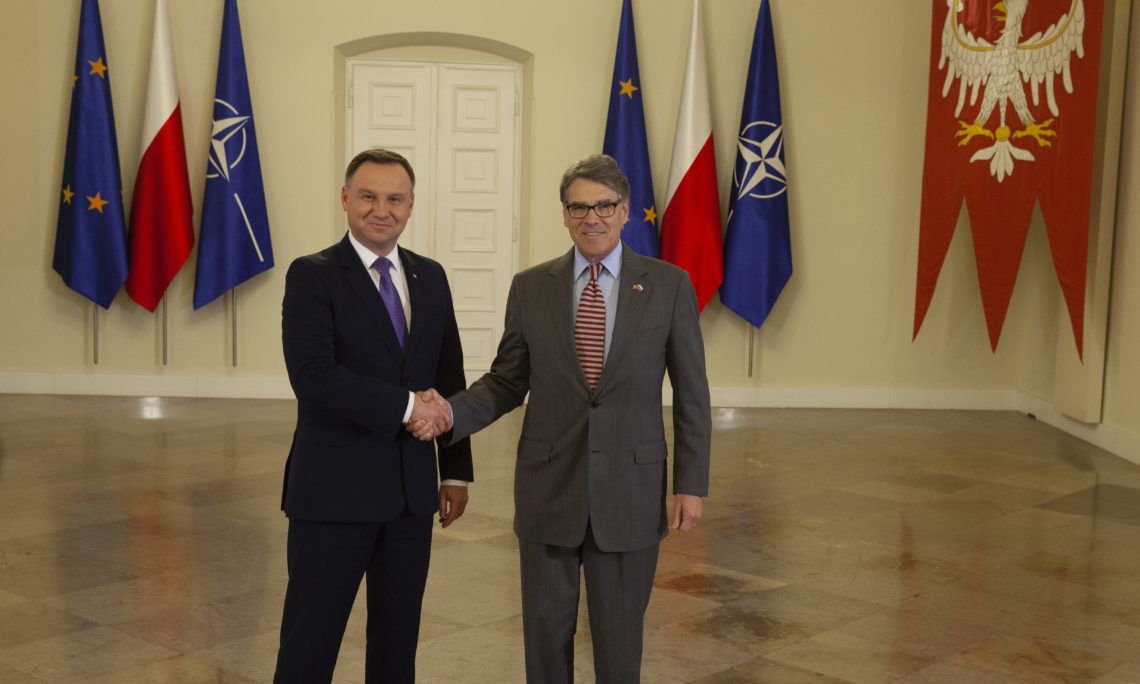 WARSAW, POLAND – Today, U.S. Secretary of Energy Rick Perry visited Warsaw, Poland, the first stop on his four-country trip to Central and Eastern Europe. The Trump Administration is dedicated to growing our energy partnership with Poland, a key strategic ally of the United States. Poland is a key member of the Partnership for Transatlantic Energy Cooperation (P-TEC), which Secretary Perry launched at the Three Seas Summit in Bucharest, Romania in September.  Following the Three Seas Summit, President Trump and President Duda of Poland announced the intent to establish a U.S.-Poland Strategic Dialogue, in which energy is an important pillar. The Secretary is in Poland to further these goals.

The Secretary began the day attending the signing of the LNG contract between Cheniere Energy and Polish Oil and Gas Company (PGNiG) at which Polish President Duda, U.S. Ambassador Georgette Mosbacher, and Poland’s Minister of Energy Krzysztof Tchorzewski were in attendance. The two companies signed a historic 24-year agreement for supplies of liquefied natural gas from the United States to be shipped to Poland. This contract is one of several that builds on the desire of Poland to diversify their sources of energy, and the effort of the Trump Administration to expand U.S. LNG abroad as an alternative to Russian gas.

Secretary Perry later joined his Polish government counterparts and Ambassador Mosbacher for a briefing on the PolEX 2018 Cyber Exercise. This first-of-its-kind transatlantic cyber exercise focused on sharing best practices to defend critical energy infrastructure against cyber-attacks, and experts from DOE’s Idaho National Lab played a leading role. Secretary Perry emphasized that the United States stands with Poland as we continue to battle this common threat in the months and years to come.

Finally, Secretary Perry participated in several bilateral meetings with high level Polish officials including President Andrzej Duda, Prime Minister Mateusz Morawiecki, and Minister of Energy Krzysztof Tchorzewski. During these meetings, the Secretary underscored the enormous opportunities for energy collaboration that exist between Poland and the United States. The wide ranging discussions about the expansion of our bilateral energy partnerships with Poland included everything from the future of its nuclear energy program to the development and production of offshore wind and shale oil and gas.  During the meetings, Secretary Perry underscored that the United States can be a reliable partner to help them meet their energy needs and clean up their environment. The day concluded with the signing of the U.S. Poland Joint Declaration of Energy Security, which emphasized the expansion of cooperation between Poland and the United States in a variety of areas including: Civil Nuclear Energy, Cybersecurity, Natural Gas, Clean Coal, Grid Resilience, and Fuel Storage and Transportation.