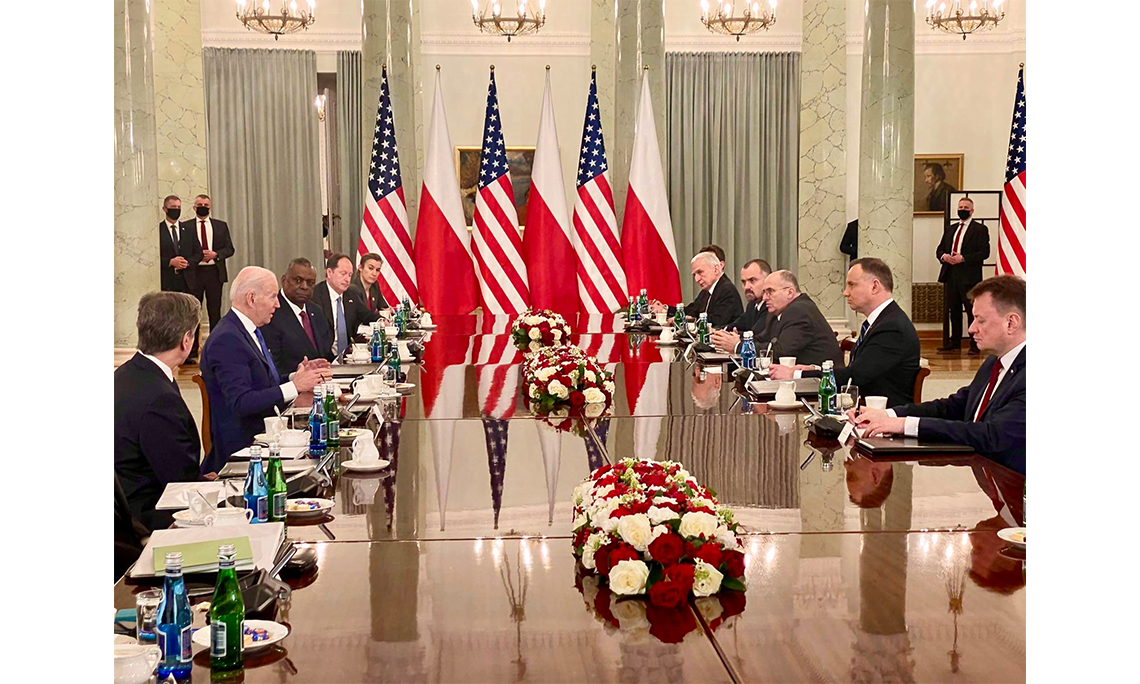 PRESIDENT DUDA:  Excellency Mr. President, distinguished members of the American delegation: I am delighted, and it is an immensely important moment to us to host you here, Mr. President, the President of the United States of America, along with the members of your delegation — to host you here in Poland, in Warsaw, in this time so immensely important for the whole world.  Thank you so much.

That — this presence shows in such an excellent way, but also strengthens the fact of extremely strong Euro-Atlantic ties.  It also demonstrates the unity of the North Atlantic Alliance and the traditional cooperation in the military sphere, in the economic sphere, and also in the political sphere between the United States of America and Poland.

Thank you, Mr. President.  We are grateful for your yesterday’s visit to Rzeszów, which is of extremely symbolic character to all of us.  But it is also of key importance for all of those who are helping and assisting refugees from Ukraine on a daily basis.

Poles, guests from other countries, our volunteers, foreign volunteers — they are dedicating themselves; they are sacrificing their time, offering all the means and measures in order to help people.

So, thank you, Mr. President, so much for paying that visit yesterday.  It is hugely important.

But let me stress — and very strongly, Mr. President — that although times are very difficult, today, Polish-American relations are flourishing.

We are the first, the biggest customer buying American LNG gas.  We have received LNG gas for many years.  Our gas terminal in Świnoujście, it helps us to diversify our gas resources in Poland.  It is hugely important, given today’s Russia’s aggression Ukraine, given this energy blackmail which Russia has pursued for many years right now.  We have built that LNG terminal in Świnoujście precisely to fight this blackmail, to avoid this blackmail.  And we are thankful for U.S. support in this respect.

Furthermore, we are grateful for continuing on this path.  We started a program on civil nuclear energy — the construction of U.S. nuclear power plants in Poland, which are indispensable to us to protect the climate and to develop a modern energy sector in our country.

I strongly believe that this partnership that we have between the United States and Poland in the development of nuclear energy in our country, in close cooperation between our two states, will be implemented and finalized.

I have here with me Minister Piotr Naimski who is responsible on the Polish side for this program.  And I do believe that along with American companies, but under a strong patronage of the White House, we will be able to successfully implement in the near future, because Poland badly needs it.

Mr. President, we have very good economic relations.  We have got — in 2021, according to our estimates, we had more than 18 billion U.S. dollars of trade volume, despite the coronavirus pandemic, despite other obstacles that were in the way.  This, it makes us really pleased.  We’re happy with all the U.S. investments in Poland.  We are happy to welcome them here, just as we are happy to welcome U.S. soldiers who are coming up to us in order to strengthen the eastern flank.  We are grateful for this help.

But let me also stress, Mr. President: We are a serious partner.  We are a credible ally.  We do everything we can in order to live up to the task of defending our country ourselves.  That is why we adopted a new bill, the Act on Defense of the Republic of Poland, and that is why as early as next year we will start to allocate 3 percent of our GDP on defense.  That is why I want to, and we want to, increase those spendings also in the years to come.

We want to equip our armed forces with modern equipment, and that is why, in the future, we want — we intend to buy well-tested and modern military equipment that is produced in the United States of America.

But, of course, we would be very much interested in establishing a cooperation with the United States in this respect.  And we are delighted with every element of this cooperation that is developing, such as the possibility to co-produce, in Poland, Black Hawks.  And right now, we would like to have more forms of such cooperation also in the military sphere.

This is also important for the representatives of the U.S. business circles.  Wherever you can, Mr. President, they feel that this place is safe and secure.  So, Mr. President, we are so much grateful for your visit.

But let me stress one thing, sir: This is a very difficult situation, what is happening in Ukraine right now — this Russian aggression and this huge tragedy of the Ukrainian people.  All of us, together, are experiencing it with them.  And this also creates a great sense of threat for my compatriots, for the Polish people, because we know what Russian imperialism stands for, and we know what it means to be attacked by Russian armed forces, because our grandfathers and great-grandfathers experienced that; sometimes even our parents experienced that.

So, thank you for your presence.  And thank you, first and foremost, for your incredible leadership, strong leadership.  Thank you for this very strong voice of the United States which leads us and which very resolutely calls on Russia to stop its aggression against Ukraine.

And also, we hope that we will further strengthen the Euro-Atlantic bond.  Thank you, Mr. President, once again for your presence.

PRESIDENT BIDEN:  Mr. President, thank you very much.  Twenty-five years ago, when I spoke at a university here in Warsaw, after having led the effort for Poland to join NATO, I used the phrase — and my Ambassador reminded me of this — I said — started off by saying, “For your freedom and for ours.”  “For your freedom and for ours.”  I meant it then, and I mean it now.

You know, Mr. President, we have — the most important thing that binds us together are our values: freedom — freedom of the press; making sure that people are — that government is transparent; making sure people have the right to vote, et cetera.

And I — we had a very — and I hope we haven’t kept you waiting.  It’s good to be back in this room again, but I hope we didn’t keep you waiting too long.  But we were discussing a lot of things in private, not the least of which was that, as I pointed out — and my colleagues, I’m confident, agree with me — is that America’s ability to meet its role in other parts of the world rests upon a united Europe and a secure Europe.

We have learned from sad experience in two world wars: When we’ve stayed out of and not been involved in stability in Europe, it always comes back to haunt us, the United States.

So I’ve been saying for a long time — as a senator who visited here and a member the Foreign Relations Committee, as Vice President for eight years, now as President — that stability in Europe is critically important to the United States in terms of our interest not only in Europe, but around the world.

And so, what we talked about is the need for us to stay in constant contact and know what one another are doing.  The United States and my colleagues on this side of the table heard me say it many, many times: We take Article 5 as a sacred commitment, not a throwaway — a sacred commitment that relates to every member of NATO.

One of the things that I thanked the President for downstairs was the fact that the single-most important criterion in this time of a changing world — so much has changed, and not just here but in other parts of the world — is that NATO stay absolutely, completely, thoroughly united; that there be no separation in our points of view; that whatever we do, we do in unison; and everyone — everyone comes along.

I’m confident that Vladimir Putin was counting on being able to divide NATO, to be able to separate the eastern flank from the West, be able to separate nations based on past histories.  But he hasn’t been able to do it.  We’ve all stayed together.  And — and so, I just think it’s so important that we — Poland and the United States — keep in lockstep in how we’re proceeding.

And also, we do acknowledge that Poland is taking on a significant responsibility that I don’t think should just be Poland, it should be the whole world — all of NATO’s responsibility.

The fact that you have so many — so many Ukrainians seeking refuge in the — in this country of Poland, we understand that because we have, in our southern border, thousands of people a day — literally, not figuratively — trying to get into the United States.  But we believe that we, the United States, should do our part, relative to Ukraine as well, by opening our borders to another hundred thousand people.

And — but that’s — and in addition to that, I think it’s important that we are in constant contact as about how we each wish to proceed, relative to what Russia is doing, and how to proceed.

And so, I — I just want to thank you, Mr. President, for being available, for being so cooperative, for being — and letting us know exactly what’s on your mind.  It’s on the mind of the Polish people — what their concerns are and what they think our responsibilities are.

So, thank you very much.