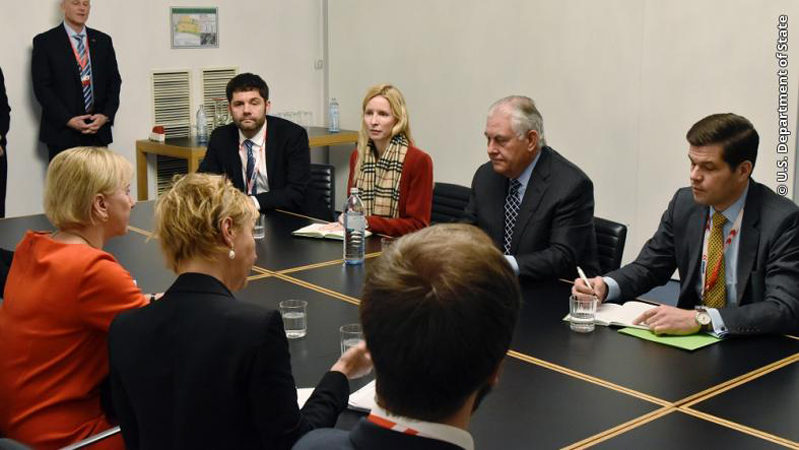 Secretary of State Rex Tillerson and Assistant Secretary A. Wess Mitchell (right) meet with the Swedish Foreign Minister at the 2017 Organization for Security and Co-operation in Europe Ministerial Council in Vienna, Austria on December 7, 2017.

I had the privilege of accompanying Secretary Tillerson on his recent, seventh trip to Europe. It was a busy week of meetings in Brussels, Vienna, and Paris with our NATO Allies, EU partners, OSCE members, and French leaders. In every engagement the Secretary reinforced the United States’ commitment to our allies. Together, he underscored, we can achieve greater security and prosperity for all through shared sacrifice and responsibility.

We had a positive conversation with EU leaders that reaffirmed our shared interests on issues including taking a firm stand against Iranian destabilization in the Middle East, the DPRK’s unacceptable aggression and nuclear ambitions, and exterminating ISIS. The Atlantic alliance plays an important role in our shared security objectives, and we encourage the strengthening of NATO-EU cooperation, with an emphasis on the EU adding to Europe’s real defense capabilities.

At the NATO Foreign Ministerial, Secretary Tillerson reaffirmed our commitment to Article 5 and to transatlantic security. Our mutual security is the foundation on which all other components of the transatlantic alliance rest. NATO provides the security that protects not only our territories and our citizens, but our values, our way of life, and our right to live in freedom.

However, as the Secretary said, “our security is strongest when allies and partners shoulder their fair share of the burden.”  While we are encouraged by the increasing number of Allies who are meeting the commitment to spend two percent of their GDP on defense by 2024, the United States expects that all 29 Allies will increase their defense budgets this year. The threats we face have changed over time, and for NATO to continue to be effective, we need to see greater investment in our collective defense. We should not just spend more, we should also spend “smart”. NATO Allies have also committed to allocating 20 percent of our defense budgets to major equipment that will make NATO more capable to face whatever threat may arise.

Our discussions at NATO and the OSCE reconfirmed that it’s not business as usual with Russia.

The Secretary, throughout his meetings, took a firm line against Russia and emphasized the importance of defending the territorial integrity of Ukraine. At the 57-nation OSCE Ministerial Meeting in Vienna, the Secretary highlighted ways to deepen cooperation on shared security challenges, especially the protracted conflict in Ukraine – and once again called for the full implementation of the Minsk agreements. The OSCE is an important pillar of our common security and it plays a key role in Ukraine, where its Special Monitoring Mission (the SMM) provides impartial reporting about the situation on the ground. The Secretary underscored his support for the brave members of that mission and called on Russia to put a stop to the harassment and violence against the SMM. He paid tribute to Joseph Stone, an American paramedic killed in April while on patrol, and commended the bravery and commitment of the SMM monitors.

At each stop, we were able to meet the members of our overseas community and their families.  The Secretary met with Marines, Eagle Scouts, and embassy staff. In Brussels, he even met the newest member of our community, the two-week old son of Foreign Service Officers. The Department’s strongest resource is its people, both overseas and in Washington, and we repeatedly saw the results of their hard work and talent in the preparation for the trip and during the trip itself. This extraordinary work reminds me of why I am honored to lead the Department’s European Bureau.

We were pleased to see our transatlantic community in action, moving forward to take more responsibility for our common defense. The efforts of the past 70 years manifest themselves today in a strong and unified transatlantic partnership. The United States remains committed to our enduring relationship with Europe, and these same efforts will drive that relationship in the year to come.