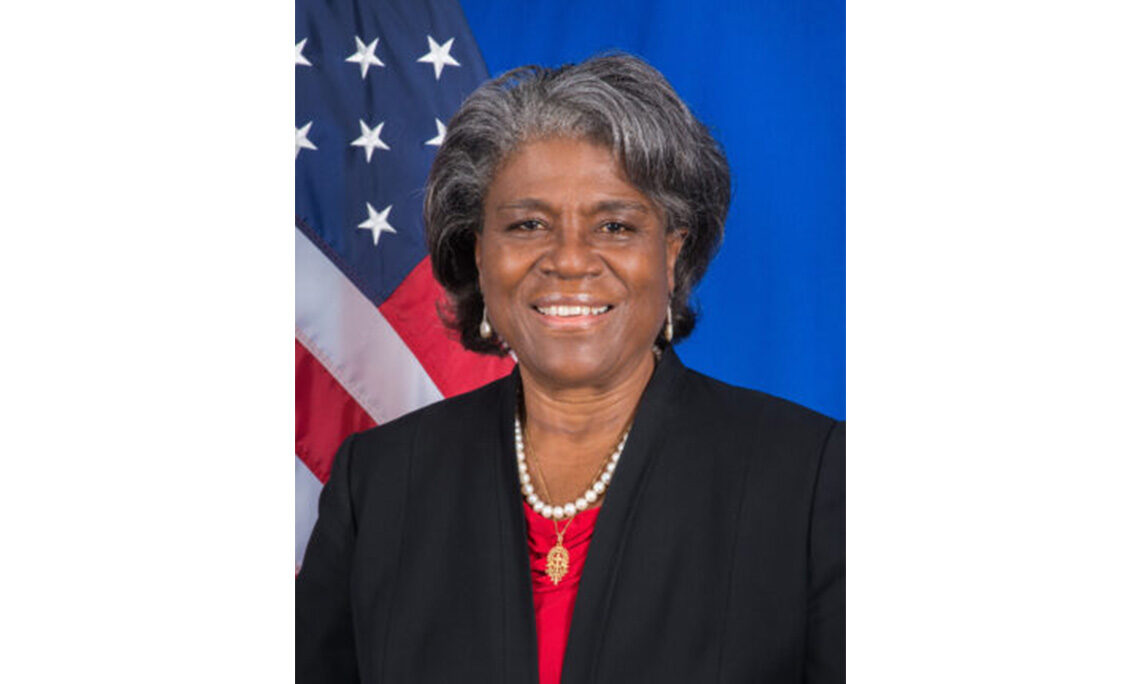 QUESTION: So we’re talking at the moment when we might see, maybe, a potential shift in the situation around Ukraine, and with an announcement of some Russian forces leaving. So I was – I just want to ask, have you seen any evidence of that? And have you seen any sign of a shift from your Russian colleague, maybe?

AMBASSADOR LINDA THOMAS-GREENFIELD: Well, that’s a great question. We have not seen any signs of this movement of Russian troops. We’ve heard it, as you have, and we would welcome a decision by the Russians on this point. But it doesn’t address the fact that they still have over 100,000 troops on the eastern border of Ukraine, and that they are still threatening Ukraine’s sovereignty and the integrity of their border.

We want to continue to lean in for a diplomatic solution to this situation, and we have leaned in at the highest levels of the U.S. government in terms of our engagement with the Russians. And again, there are equally high-level engagements being made by our European allies with the Russians to find a diplomatic way forward to address their security concerns as well as the security concerns of all of our allies.

QUESTION: So the administration officials, I think, Jake Sullivan said it’s still not clear – he said that on Friday – it’s still not clear if the Russians are serious about these talks and if they are negotiating in good faith. Have you – has anything changed in that regard?

AMBASSADOR THOMAS-GREENFIELD: Nothing has changed in the sense that we are still going to pursue our diplomatic efforts, and we are still going to push the Russians to make the right choice, which is to choose diplomacy, to choose sitting at the negotiating table with us to address their security concerns. They cannot address those concerns on the battlefield. They have threatened their neighbor, and they are threatening the peace and security of Europe. And we have to find a way diplomatically to address these issues because what a confrontation would mean is a huge humanitarian crisis in the region. It will mean the loss of many thousands of lives. And it will mean destabilizing not just Ukraine but other countries in the region.

QUESTION: So another piece of news that we have seen today was that the Russian parliament has passed a bill calling for the recognition of the separatist so-called republics. And I assume it would be accompanied by, if this happens, by (inaudible) of Russian forces. So would that constitute a further aggression and thus trigger the sanctions that you’ve been threatening?

AMBASSADOR THOMAS-GREENFIELD: It absolutely constitutes further aggression. It shows that the Russians are not de-escalating. It’s again another sign of confrontation, and that the Russians are not negotiating in good faith. But again, we will continue to push for diplomacy because we also think it would not be in Russia’s interests to start a conflict in the region because we’ve been clear that our response will – particularly as it relates to sanctions and the impact on their economy – that it will be forceful and will be united with our European colleagues. And so the impact of that on ordinary Russian citizens will be felt very, very strongly.

QUESTION: And so the Administration has said it has several sanctions packages, depending on the scenarios, different scenarios. Do you have a package for this particular scenario, where there is a recognition of these breakaway republics?

AMBASSADOR THOMAS-GREENFIELD: Again, we have a number of options for responding to Russian aggression, and we will continue to review those packages as they relate to actions that are being taken by the Russians.

QUESTION: You mentioned that Russia has threatened Ukraine, and that the UN Charter prohibits the threat of use of force. So is that a violation of the UN Charter, and wouldn’t that itself call for sanctions because they’re doing this damage to the economy, for example?

AMBASSADOR THOMAS-GREENFIELD: The Secretary-General in his statement yesterday clarified very strongly that any attack on Ukraine is a violation of the UN Charter. And we have been very clear on that from the very beginning, that this is not a confrontation between Russia and the United States. It is a confrontation between Russia and the world, as we all have signed on to the values laid out in the UN Charter.

QUESTION: But the presence of the troops itself, is that a violation?

AMBASSADOR THOMAS-GREENFIELD: The presence of the troops are a sign of confrontation. If they were to further invade Ukraine, that would absolutely be a violation of the UN Charter. And this is why we’re continuing to work diplomatically to discourage the Russians from making the mistake of moving across the Ukrainian border again.

QUESTION: So President Biden said months ago at the – last year that he wants a stable and predictable relationship with Russia. But given what’s happened, regardless of how it ends, do you think it’s still possible, or we’re living in a different world now?

AMBASSADOR THOMAS-GREENFIELD: No, it is still possible to have a stable and predictable relationship with the Russians if they choose to move in that direction. We will continue to pursue that type of relationship with them. But we’re also prepared to respond to any confrontation that the Russians should choose to make toward our allies as well as toward the United States.

QUESTION: Your colleague from the State Department, Ned Price, recently said that the presence of Russian troops in Belarus in some way may undermine its status as an independent country, and there’s concern that the forces there might stay permanently. What do you think are the implications of that for –

AMBASSADOR THOMAS-GREENFIELD: Yeah. Certainly Belarus, as an independent country, are compromising their own integrity and they’re compromising their own independence with these troops in Belarus that are threatening Ukraine. And so they, too, will be responsible should Russia use their border to invade Ukraine. They, too, are responsible for a confrontation with their neighbors that they can choose to not be a part of.

QUESTION: And I want to ask you about – since I’m from Poland, what’s your view of the role Poland has played in this crisis? We’ve seen a lot of consultations with – between the two sides – I mean between Poland and the United States.

AMBASSADOR THOMAS-GREENFIELD: We have a close alliance and very close relationship with the Government of Poland. They are a member of NATO, and we are working with Poland to ensure that we provide them with the security that they need on their eastern flank. And we have very much appreciated the relationship that we have developed with Poland over the course of this relationship.

QUESTION: And one of the things that Polish diplomats say about this – that they tried to work towards a common European position regarding sanctions. Do you see progress in coordinating this – those moves?

AMBASSADOR THOMAS-GREENFIELD: We have been very unified in NATO and in Europe in terms of sanctions. And I think one of the results of the Russian action and their aggression is they have pushed us closer together. They’ve made NATO stronger and more unified than ever before. And I don’t think that that was their goal initially because they sought to divide us, and what they have ended up with is a stronger alliance between us and our European neighbors.

QUESTION: So you mentioned that there’s still room for diplomacy and the U.S. is serious about dialogue about security concerns. So what are the areas of where you can make progress, where progress is possible?

AMBASSADOR THOMAS-GREENFIELD: Again, we’re hoping that we can sit at the negotiating table with the Russians and find a way forward to address their security concerns, to address Europe’s security concerns, and particularly to address the concerns of Ukraine. And we think that’s possible, and we’re leaning in aggressively to find a diplomatic solution that will allow that to happen so that we don’t end up with a confrontation that will lead to a humanitarian crisis, to the loss of thousands of lives, and to the disruption and destabilization of Ukraine.

QUESTION: And speaking about a humanitarian crisis, if this comes to pass, Poland is expecting massive inflow of refugees. And the Polish Government has already said that if that happens it will ask for assistance, also for U.S. assistance. Is America ready to provide such help?

AMBASSADOR THOMAS-GREENFIELD: If there’s a humanitarian crisis and an influx of refugees into Poland, Poland can be assured that the U.S. will be there to support them along with other European allies. We’re also working closely with humanitarian organizations, the UN High Commission for Refugees and others, to provide the necessary support. We have had discussions with them to encourage them to make contingency plans to prepare for such an eventuality, and we will be there to support their efforts as well as to support Poland.