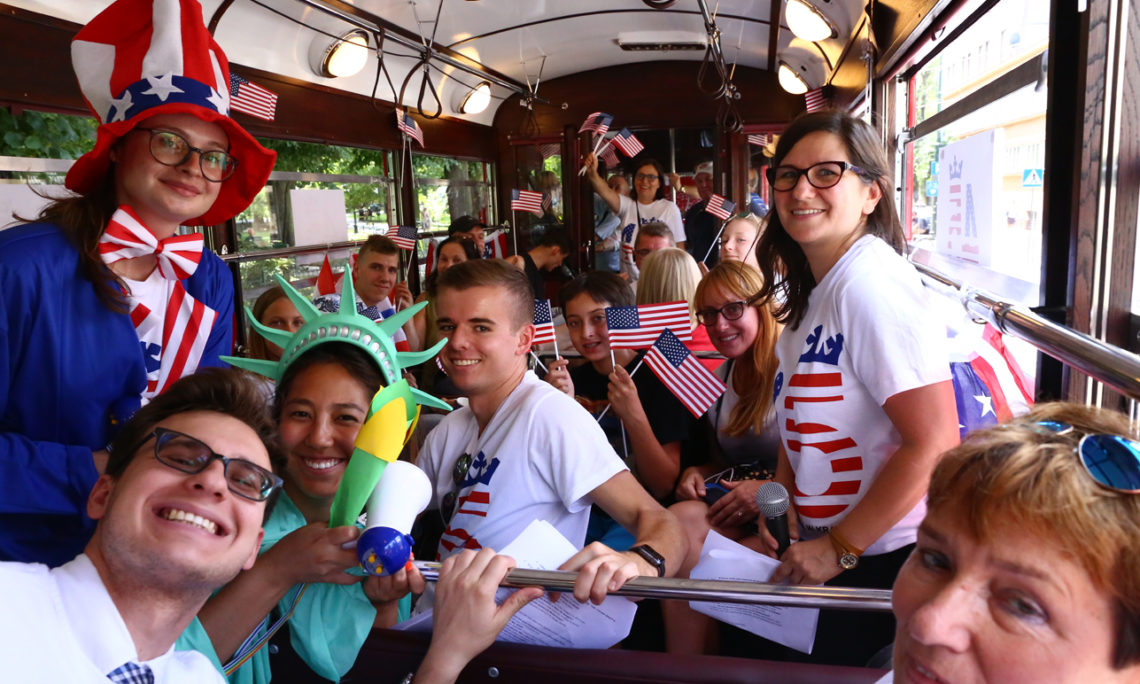 On August 9, the U.S. Consulate in Krakow organized a special celebration aboard a tram, to commemorate the 45th anniversary since the Consulate’s opening. Embellished in American flags and bunting, the “Consulate Tram” opened its doors for both Cracovians and tourists for a “hop on, hop off” experience. In support of this event, the city of Krakow lent the Consulate a vintage tram, offering the public a true historical tram experience.

For a two hour period, the decorated tram circled along the crowded outskirts of the city center, around Planty Park. At every stop, two staff members dressed as the Statue of Liberty and Uncle Sam stepped out onto the streets to encourage people aboard. American flags and candy were offered to those entering the tram. Once inside, passengers enjoyed live, popular American music and tested their knowledge of U.S. history and culture through trivia contests. Winners received Consulate-themed gifts: mugs, T-shirts and puzzles.

Krakow’s Plenipotentiary for Culture Robert Piaskowski, joined Acting Consul General Kathryn Porter for the inaugural loop, reflecting the city’s close partnership with the Consulate.  The enthusiasm of the Consulate effectively drew over one hundred attendees, overcrowding the tram on several occasions.

The U.S. Consulate is proud to maintain a diplomatic presence here in Krakow for 45 years, and in that time, we have witnessed our bilateral cooperation expand and thrive.  The anniversary tram is one of several initiatives created to commemorate the 45th anniversary of the Consulate, in an effort to get out really interact with Krakow residents and share American culture.