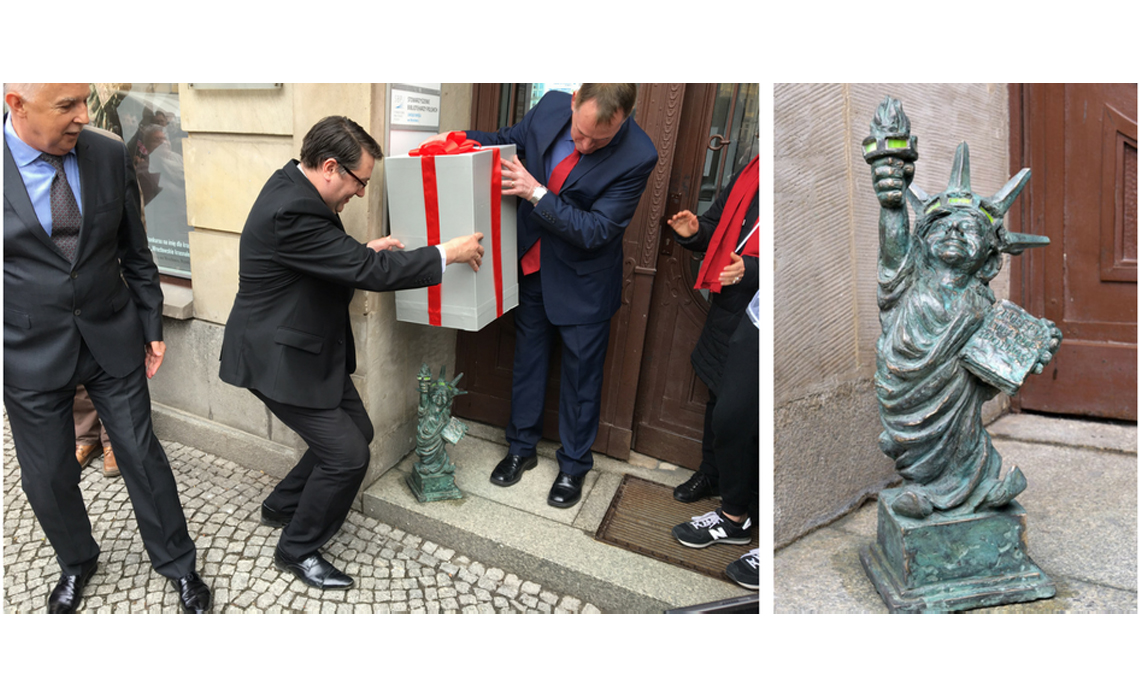 The U.S. Mission to Poland unveiled the newest gnome in Wroclaw on Thursday April 27 at noon outside the American Corner Wroclaw at Rynek 58.  The gnome, named Lady Wolnosc, is one of Wroclaw’s more than 400 gnomes, and is a stylized miniature version of the Statue of Liberty in New York City.

The Statue of Liberty was a gift from the people of France to the United States in 1886, and serves as a symbol of freedom, welcoming immigrants and tourists to the United States.  Today, Lady Wolność stands in front of the Lower Silesia Public Library where Poles regularly visit the American Corner and the romance language library.  The library also hosts the French honorary consulate, so it is a natural location for Lady Wolnosc to unite three allies in a common bond.

With the words “Liberty,” “Liberté,” and “Wolnosc” emblazoned on a book in her arm as a reminder of the core value upon which Poland, the United States, and France were founded, Lady Wolnosc welcomes all guests to the library where they can learn about the United States, practice foreign language skills, or simply grab a great book to read.

The gnomes throughout Wroclaw have become a much-loved element of the city’s landscape, and so the U.S. Embassy in Warsaw, U.S. Consulate in Krakow, and the American Corner in Wroclaw worked with local partners to make the gnome a reality.

The U.S. Embassy’s Deputy Chief of Mission, John Law; Director of the Lower Silesia Public Library, Andrzej Tyws; and French Honorary Consul Richard Kepinski unveiled the statue at a ceremony on the central market square.  “The Statue of Liberty is a universal symbol of the love of freedom which is at the heart of the American, Polish, and French identities.  We’re very pleased we could work with the library and the French Honorary Consulate to create Lady Wolnosc and unveil her today,” said Mr. Law.

The idea of creating the gnome came about during a conversation last summer between Counselor for Public Affairs Christopher Midura, Deputy Press Attaché Stephen Dreikorn, and a former Embassy intern from Wroclaw, Agata Karas.  “Agata was telling us about the gnomes and their history,” Mr. Midura explained. “We realized there was no gnome outside the library hosting the American Corner, so we decided we had to rectify this.  It became one of Agata’s tasks during her internship.”

“I really enjoyed my internship at the U.S. Embassy, and it is amazing to see this project I started last summer come to completion here in my own home town,” Ms. Karas exclaimed.

“We invite everyone to see Lady Wolnosc and visit our American Corner Wroclaw at the same time.  Both serve as a constant reminder of the friendship between Poland and the United States,” stated Mr. Law.  For more information about the American Corner in Wroclaw and Poland’s American spaces program in general, click here.  For more information about the U.S. Embassy’s internship program, click here.