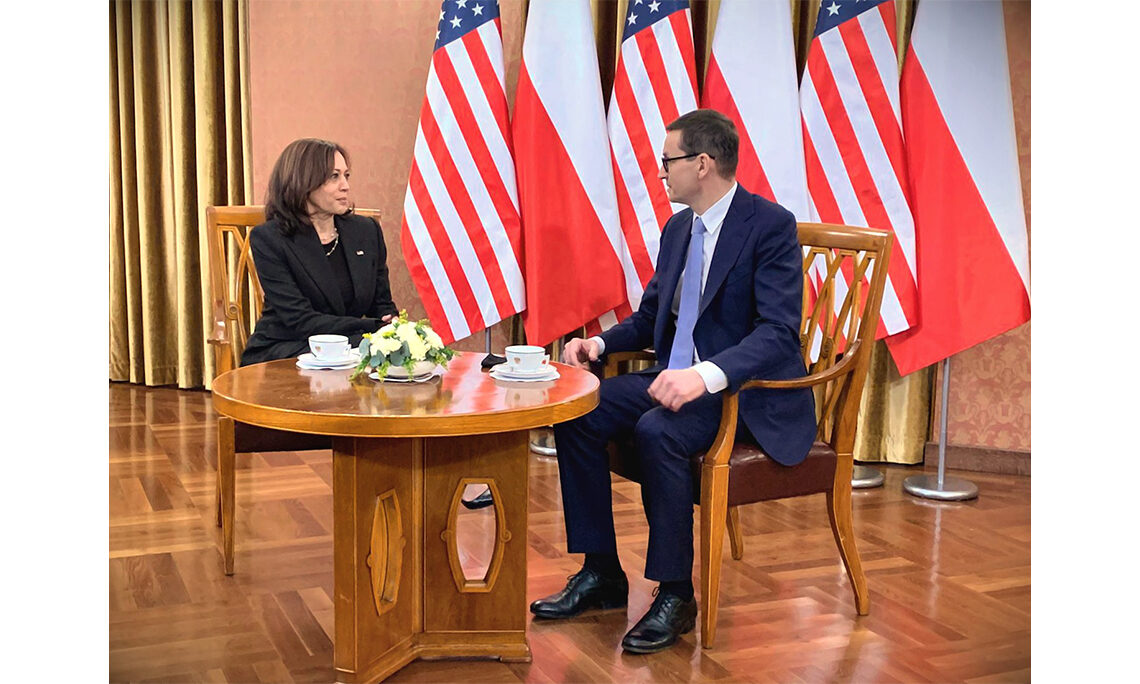 PRIME MINISTER MORAWIECKI:  Madam Vice President, it’s so good to welcome you in Poland.  Well, lacking those specific circumstances, I’m so happy that we have such a strong alliance with the United States.

It’s very important to strengthen the eastern flank, in particular right now, with what is happening in the Ukraine.  And we have to dedicate quality time to discuss what — how to help Ukrainians to maintain their sovereignty and territorial integrity and their freedom, because they’re fighting for our freedom — for the freedom of the whole of Europe.

Thank you also for your brave decision about, you know, being independent of the Russian oil and gas, because this is the — this is their money for the war machine, so to say, in the first place.

So, thank you so much for being with us in Poland.

VICE PRESIDENT HARRIS:  Thank you, Mr. Prime Minister, for this warm welcome.  I wish it were under other circumstances.  And I am here — standing here on the eastern flank of NATO to reaffirm our commitment, the United States commitment to Poland and our NATO Allies.  And there is no question that we stand united as it relates to many issues and the particular issue of Ukraine —

VICE PRESIDENT HARRIS:  — and what we are prepared to do to defend all of the principles that are integral to us as NATO countries, in terms of fighting for the sovereignty and territorial integrity of, in this case, Ukraine.

I appreciate the conversation that you and I had by telephone —

VICE PRESIDENT HARRIS:  — just last week, where we discussed a number of issues that includes the extraordinary work that your leadership, the people of Poland have been doing —

VICE PRESIDENT HARRIS:  — to invite, with such courage and such generosity, the refugees who have fled Ukraine.  I have been watching and reading about the work of ordinary people doing extraordinary things in this time of great difficulty.  And so, I bring you thanks from the American people to the Polish people for what you all have been doing.

We will discuss many issues today, and it will include the ongoing commitment that the United States has to support of this region, including the people of Ukraine.  That ranges from security assistance, to humanitarian assistance, to all the other work that must be done to ensure that Russia also pays a serious and severe consequence.

As we have said from the beginning, if Russia were to take aggressive action, there would be consequence.  And those consequences, I believe, have been evident but are a result of the work that we have been doing together as a unified force.

So I thank you, and I look forward to our discussion.

PRIME MINISTER MORAWIECKI:  Thank you.  Thank you very much.  And also, in particular, thank you for the unity of the Western world, because this is what surprised Mr. Putin, I’m sure.